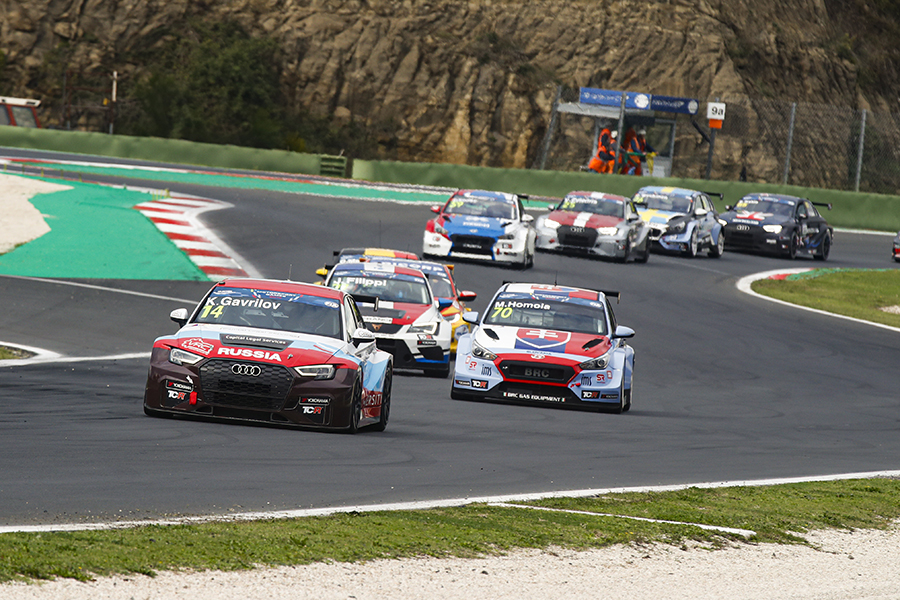 A lights-to-flag win for Gavrilov in the first race

Klim Gavrilov claimed a light-to-flag victory in the first race of the FIA Motorsport Games’ Touring Car Cup at Vallelunga. He took the lead at the start in his Team Russia Audi RS 3 LMS and never looked back. He resisted the pressure from Mat’o Homola in the first part of the race, but after the safety car intervention he was able to create a gap that was not to be filled.
As Homola cruised to the second position, there was a tough battle for P3 that involved John Filippi, Tom Coronel and Gilles Magnus. Positions were swapped several times until Magnus and Coronel came together at the Roma bend during lap 6; Coronel got the worst of it and, his car unbalanced, dropped to P7, while Magnus continued his charge and overtook Filippi for P3 on lap 12.
With the Frenchman holding on to the fourth place, Czech youngster Dušan Kouřil was classified a brilliant fifth ahead of New Zealand’s rookie Faine Kahia who was able to keep Jessica Bäckman at bay after she had passed Coronel for P7. Enrico Bettera and Jim Ka To rounded off the top-ten.
Rory Butcher’s MG, third on the grid, stalled the start due to a clutch problem and eventually finished 16th, while Luca Engstler joined the race only during Lap 10 as the team didn’t have enough time to replace the engine blown in the morning’s first Qualifying session. Gonzalo De Andrés did not start as the transmission of his Peugeot 308 failed just before going to the grid. Walters Zvierdris was running as high as sixth during the first laps in his Audi DSG, but then dropped back and was also given a 5-second penalty for jumping the start to be classified 15th.
The race was disrupted once by the red flag between laps 3 and 6, to recover Kristian Sætheren’s Alfa Romeo that was stuck along the track after a collision with Salem Alnusif’s Audi.
The second race will start tomorrow at 13:20 with Magnus and Gavrilov sharing the front row; live streaming can be found at www.tcr-series.com and www.tcr-series.tv.