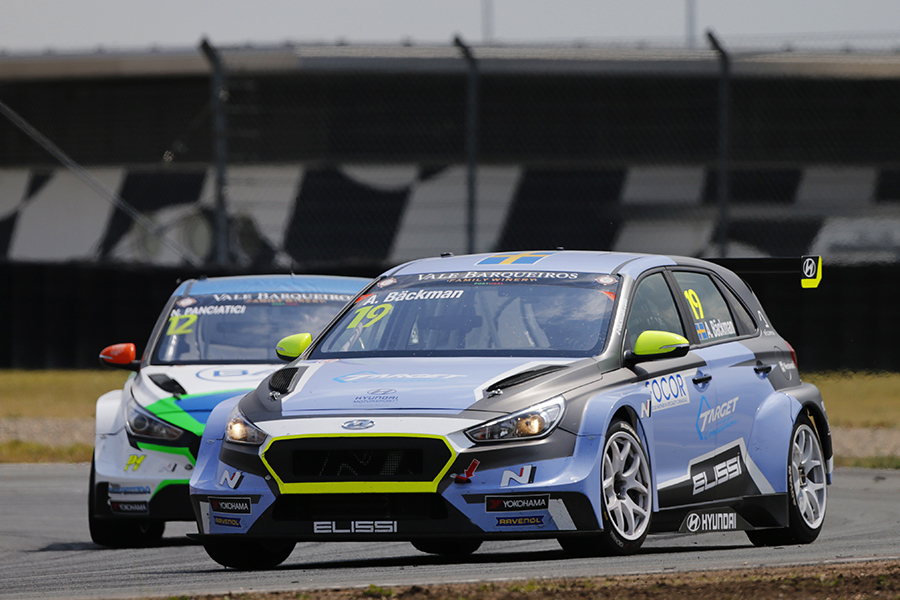 Andreas Bäckman converted his pole position into his maiden TCR Europe victory in Oschersleben’s first race. After proving the fastest in the morning’s Qualifying, the young Swedish proved the smartest in the race. Having been pipped at the start by Daniel Lloyd he didn’t panic and followed the Briton closely, putting the pressure on him in every corner. Eventually this pressure forced Lloyd to make a slight mistake with only two laps to go; Bäckman was ready to grab the occasion and muscled his way through to take the leadership.
Nelson Panciatici, who had followed the two leaders closely, waiting for an opportunity, benefitted from the situation and moved up into second, while Lloyd managed to salvage the third position ahead of Tom Coronel.
As far as the title fight is concerned, Josh Files collected a precious fifth place ahead of his new teammate and Touring Car rookie Dominik Baumann. With local hero Luca Engstler eliminated in the multiple collision of the first lap, Files has stretched his leading margin to 48 points ahead of A. Bäckman who has moved into second place, while Julien Briché is still third, a further nine points adrift.
At the start, Lloyd beat A. Bäckman into T1, while Panciatici punted J. Bäckman into a spin. A multiple collision in lap 1 eliminated Engstler, Aurélien Comte, Natan Bihel and Jimmy Clairet, while Gilles Magnus pulled over after making contact with another car.
Another collision between Davit Kajaia and Alex Morgan resulted in the Briton spinning off, while Kajaia was given a drive-through and then the black flag for not serving the penalty.
For most of the race A. Bäckman chased Lloyd but couldn’t find a gap to pass, while Panciatici followed them closely in third position. Finally, on lap 14, Lloyd went wide at T3 and both A. Bäckman and Panciatici were able to pass him.
The second race will start tomorrow at 13:30 with Alex Morgan and Josh Files sharing the front row of the top-ten reverse grid; live streaming at www.tcr-series.com and www.tcr-series.tv.