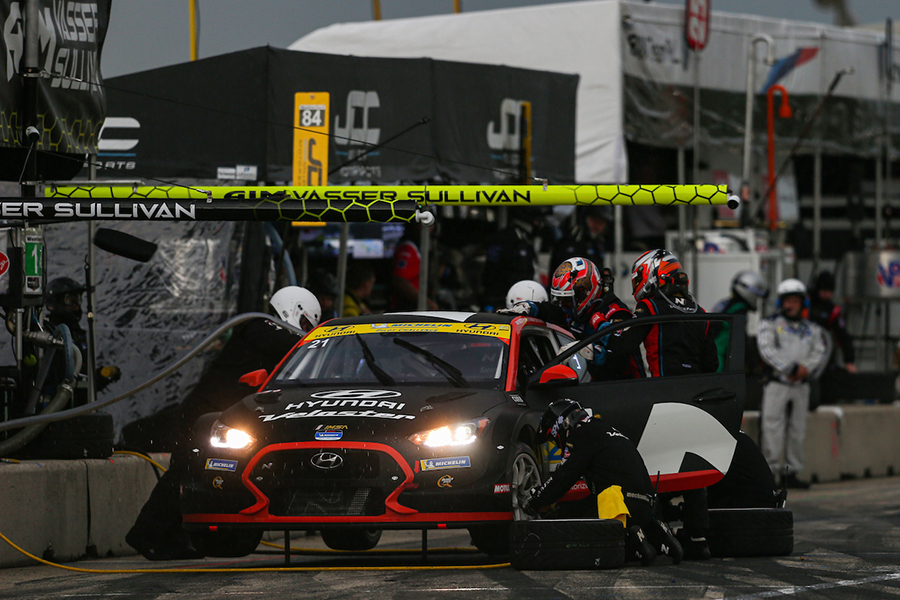 It was certainly an emotional afternoon at Road America, as the seventh round of the IMSA Michelin Pilot Challenge was delayed over one hour, because of severe thunderstorms over Elkhart Lake, and then started on a format reduced from two hours to 75 minutes of intense action.
The race ended with two safety-car periods in the last 15 minutes and a single final lap under green, which saw the Bryan Herta Autosport Hyundai Veloster N of Harry Gottsacker, then at the wheel, and Mason Filippi take their first win in the series. They crossed the finish line in second position behind the HART Honda Civic of Ryan Eversley and Chad Gilsinger, however, the Honda team was penalised for not meeting drive-time requirements and so Gottsacker and Filippi were elevated to the win.
The initial laps, on a still very damp track, saw the Audi of Nick Galante dominating on wet tyres ahead of the Honda of Brian Henderson, who was soon passed by the Audi of Chris Miller, the Hyundai of Mark Wilkins and the Honda of Shelby Blackstock.
As the track started to dry, the pole-sitter Blackstock, on slick tyres, emerged to take the lead in lap 8, while Galante opted for an early pit stop after 25 minutes of action, to change tyres.
By lap 17, the rain started to fall again, with Gilsinger’s Honda in the lead, without having made any pit stop yet and still on wet tyres; it was followed by the other Honda of Max Faulkner and the Hyundai of Gottsacker. With rain falling harder, some cars went off, prompting the safety-car out, right afterwards Eversley took the wheel of the leading Honda.
The race re-started 15 minutes from the end but went again under yellow six minutes after. In the meantime, Gottsacker played hero overtaking five rivals to take second, while the championship leading Bryan Herta Autosport Hyundai of Lewis and Wilkins suffered from a puncture and missed its pit because of the unsafe release of a GT car. Still, it managed to recover and finish fourth, retaining the leadership in the standings.
With Filippi and Gottsacker the winners from O’Gorman-Blackstosk and Ernstone-Morley, the fight for the title is incredibly close, with five cars covered by only 16 points.
The next round will be at Virginia Int. Raceway on August 23rd/24th.