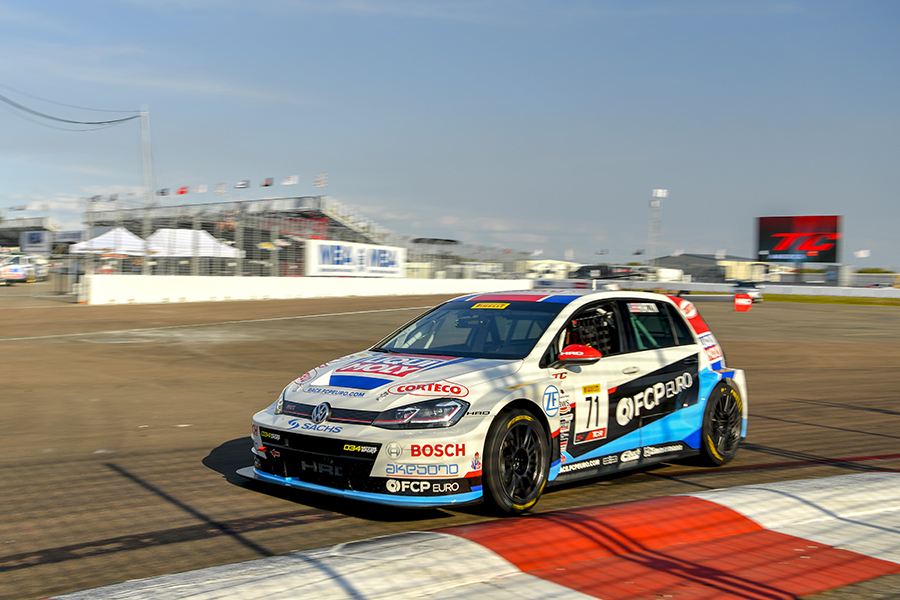 Michael Hurczyn took his and FCP Euro’s maiden win in TC America at the end of a breathtaking race in St. Petersburg street circuit. Hurczyn and his Volkswagen Golf GTI resisted the return of James Walker in the Risi Competizione Alfa Romeo Giulietta and crossed the line with a slim margin.
Bryan Putt completed the overall podium in the Audi RS 3 LMS run by eEuroparts.com ROWE Racing and won the DSG Cup.
At the start, Hurczyn sprinted from the pole position ahead of his teammate Nate Vincent, while Putt defended the third place from Walker. Positions remained frozen until lap 7, when Walker began to set fastest times. He overtook Putt and closed in on the leading duo, bettering the race fastest lap four times, from 1:21.882 to 1:21.291.
Under his pressure, Vincent tried to pass Hurczyn, but pushed him wide at the end of lap 13. After the incident, Vincent increased his pace, setting a new fastest lap of 1:21.125 and building a one-second cushion between him and Walker. However, he was under investigation for the collision with Hurczyn. The latter moved up to second on lap 17, when Walker made a mistake and run wide.
On lap 19, Vincent was given a drive through for the incident and dropped to fifth. Hurczyn was back in the lead and, as the Alfa Romeo’s pace faded, extended his margin to five seconds over Walker.
In the final part of the race Walker accelerated again and closed in on Hurczyn, finishing only one second behind. Putt retained the third place, beating a recovering Vincent by less than four tenths.
The second race will start tomorrow at 16:40 local time (22:40 CET) over the distance of 40 minutes with Vincent on pole and Hurczyn alongside him, as they have posted the two fastest laps in Race 1; live streaming at www.tcr-series.com and www.tcr-series.tv.