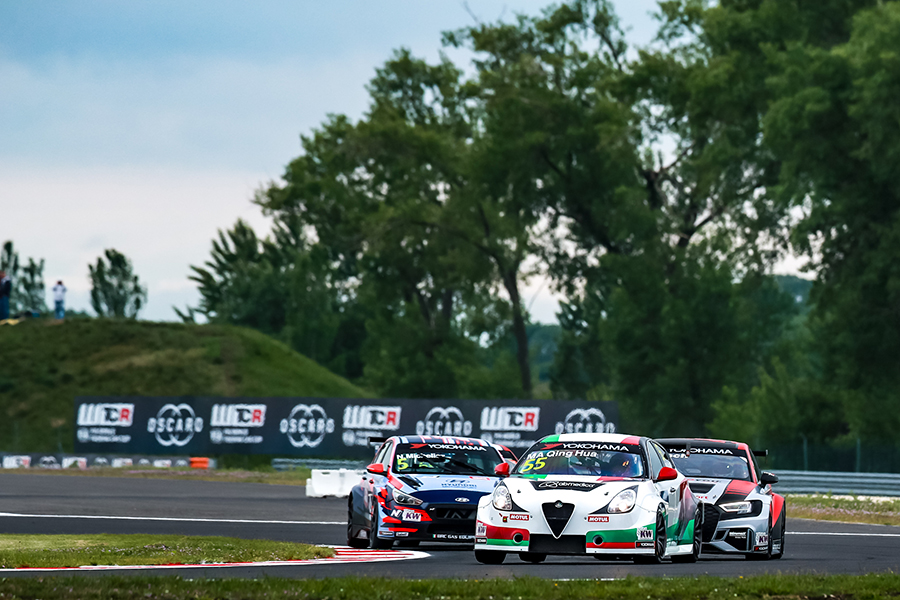 WTCR Race 3 at the Slovakiaring turned into a triumphant result for Team Mulsanne’s Alfa Romeo Giulietta cars, as Ma Qing Hua and Kevin Ceccon finished first and third, sandwiching the Hyundai i30 N of Norbert Michelisz for the whole 11 laps.
As the leading trio left the rest of the field behind, Niels Langeveld finished in fourth position, his best result in the season so far, followed by Mikel Azcona and Esteban Guerrieri.
In terms of championship standings, Guerrieri and Michelisz closed in on the leader Néstor Girolami, who was involved in a collision during the first lap and dropped far away of the point-scoring zone.
Just like in Race 1, Ma made a great start from third on the grid and took the lead from pole sitter Nicky Catsburg and Michelisz; Ceccon too managed to move up to fourth from his sixth starting position. Langeveld, Guerrieri and Daniel Haglöf followed.
On lap 2, Guerrieri dropped to eighth behind Haglöf and Mikel Azcona after making contact with the Swedish driver who was given a 30-second penalty after the race.
On lap 5, both Michelisz and Ceccon overtook Catsburg for second and third; later on the Dutchman dropped further down in the order. On lap 6, Azcona overtook Haglöf for sixth.
The leading trio pulled away and delivered some close battles for the podium positions. Michelisz was threatening Ma’s leadership, but was also defending his second place from Ceccon. Eventually they crossed the finish line in the order, with two tenths between Ma and Michelisz and four tenths between the latter and Ceccon.
The series will resume next week at Zandvoort for rounds 10, 11 and 12.