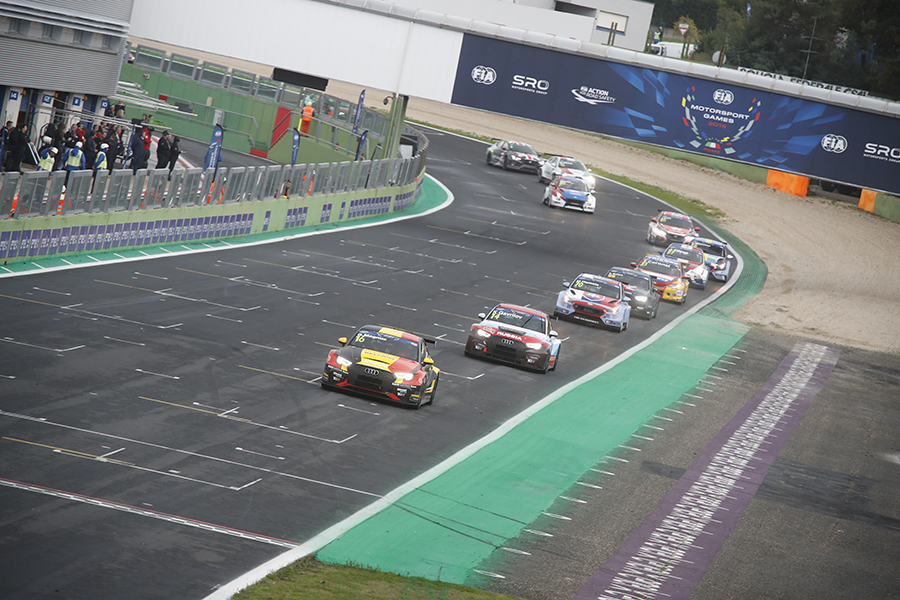 Gilles Magnus took a dominant win in the second race of the FIA Motorsport Games’ Touring Car Cup at Vallelunga, but yesterday’s Race 1 winner Klim Gavrilov finished a close second and won the Gold Medal for Russia with Magnus taking Silver for Belgium.
Tom Coronel was third in the race after a thrilling battle, while the fifth position granted Slovakia’s Mat’o Homola the Bronze Medal.
At the start, Magnus used his pole to take the lead from Gavrilov, Homola, Faine Kahia, Coronel and John Filippi. However, the safety car was deployed during the first lap as the cars of Enrico Bettera and Luca Engstler were stuck on the pit straight after having crashed. The Italian had stalled on the grid with a broken driveshaft and Engstler couldn’t avoid hitting him.
Soon after the race restarted, Kahia tried to pass Homola for P3, but went wide onto the grass, lost control and went off at the Cimini 1 bend; Homola lost momentum and Coronel overtook him for P3. As a light rain began to fell, Rory Butcher, Jim Ka To, Norbert Kiss, Zhang Zhen Dong and Jessica Bäckman began recovering positions. Butcher overtook J. Filippi for P6, while Bäckman advanced to P8 after passing Zhang and Kiss.
In lap 3, Zhang went off at the Semaforo bend and the safety car was deployed once again before clearing the track for one last lap.
Magnus managed to retain the lead, while Gavrilov had to fight with Coronel to save the second place that was worth the Gold Medal. They clashed a couple of times, while Butcher passed Homola for P4 and joined the fight. They entered three abreast into the final turn and Gavrilov crossed the line in second place, with Coronel, Butcher, Homola and J. Filippi filling the position between third and sixth, the five of them covered by eighth tenths. Jessica Bäckman was classified seventh after making contact with Ka To who went wide and dropped to ninth behind Julius Adomavičius, while Valters Zviedris in the only DSG car of the field passed Kiss for P10 during the last lap.
Mason Filippi didn’t even take the start as he lost control while warming up the tyres and went off during the formation lap.