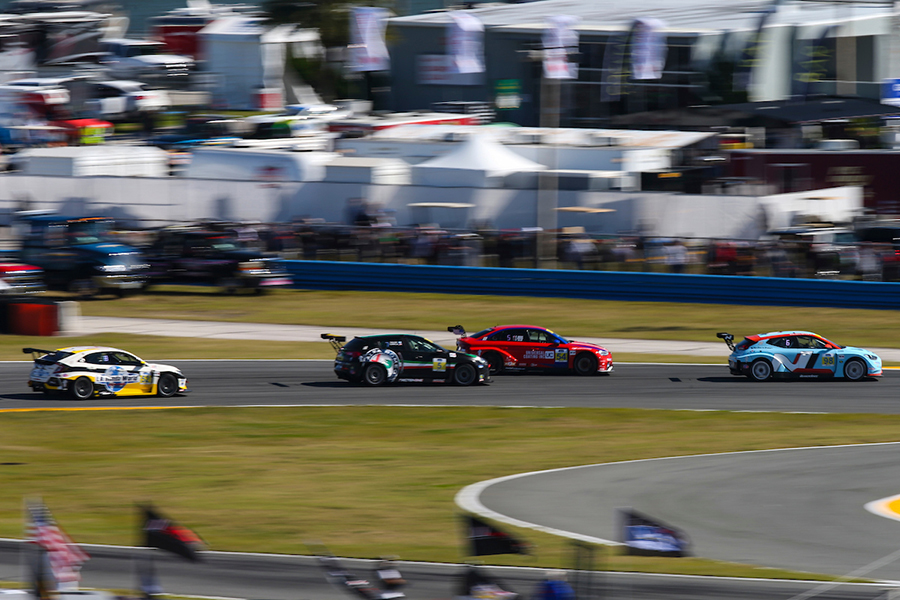 After an exciting season opener at Daytona in January, the IMSA Michelin Pilot Challenge’s round 2 is staged Friday at Sebring International Raceway as support event to the famous 12-hour race.
Honda, Audi, Hyundai and Alfa Romeo cars are due to deliver another breathtaking battle in TCR like in Daytona, where each brand had a team in the lead.
No fewer than 15 teams have been entered, with the largest patrol formed by six Audi RS 3 LMS cars, while Honda is represented by five Civic Type R machines. Two each per Alfa Romeo Giulietta and Hyundai Veloster N round off the field.
The Daytona-winning Civic #37 run by LA Honda World Racing for Tom O’Gorman-Shelby Blackstock will defend its leadership in the points, fighting against the sister car #73 of Matt Pombo-Mike La Marra and the Fast MD Racing Audi #23 of Nick Galante-James Vance that finished second and third in the opening round.
Great expectations are cherished by KMW Motorsports-TMR Engineering and Brian Herta Autosport-Curb Agajanian.
KMW-TMR’s hopes at Daytona vanished when the Giulietta of Alex Popow-Alexandre Papadopulos blew the engine and retired from the lead with 30 minutes to go. Brian Herta Autosport is eager to make up from the disappointment of the opening round; the team’s confidence has been boosted by the double victory scored two weeks ago by Mason Filippi in the opening event of TC America. At Sebring Filippi will share the Veloster with Harry Gottsacker, while the sister car will be driven by Michael Lewis-Mark Wilkins.
From the Sebring event, JDC-Miller Motorsports adds a second Audi for the reigning champion Britt Casey jr. and Mikey Taylor alongside that of Michael Johnson-Stephen Simpson.