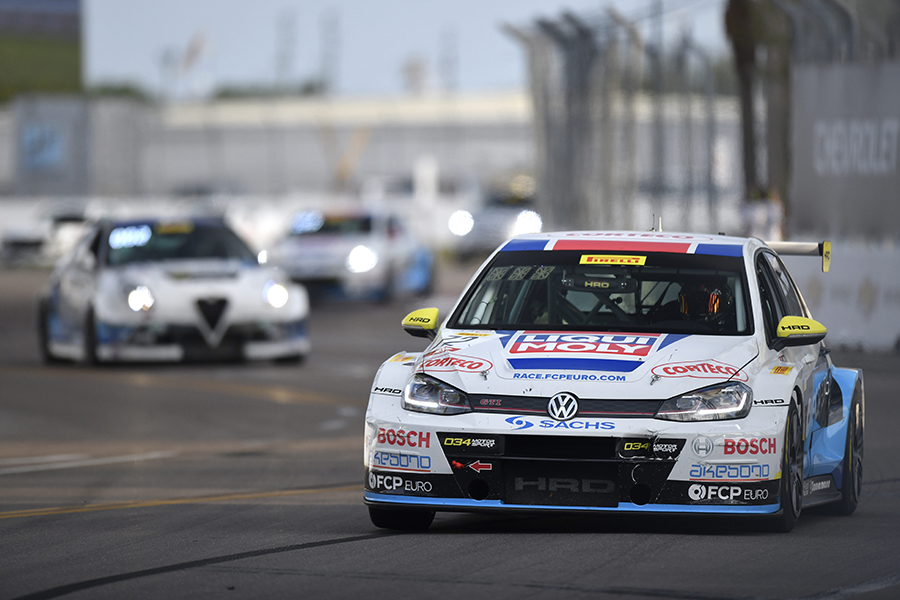 Nate Vincent made up from yesterday’s disappointment in TC America Race 1 at St. Petersburg and claimed his maiden win in the series, beating his FCP Euro teammate and Saturday’s winner Michael Hurczyn.
The race was disrupted by the safety car following the massive crash that involved James Walker who was chasing the leading duo when hit the wall at T9, destroying his Risi Competizione Alfa Romeo Giulietta.
Vincent took the lead at the start from pole position, keeping Walker at bay as the Alfa Romeo driver tried to overtake him entering into T1; Hurczyn benefitted from the situation and passed Walker for second.
For most of the 40-minute race Vincent led with a margin that varied between two and three seconds, while Hurczyn had to give his best to resist the pressure from Walker until the latter lost his car while negotiating a 120mph-turn and crashed on lap 19. The Giulietta bounced between the two walls; its driver was shocked, but looked unhurt.
The safety car was deployed and circulated until only two minutes were left on the clock and the race resumed for two final laps.
Vincent retained his leading margin, while Hurczyn managed to block an attempt from Bryan Putt at T1. Putt finished third, just like in yesterday’s Race 1, encoring his win in the DSG cup ahead of Michael McCann and Christian Cole.
TC America will resume for rounds 5 and 6 at Virginia International Raceway on April 27/28.