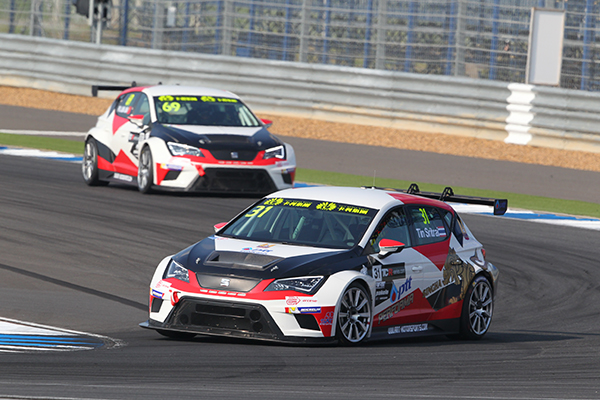 The Asia Racing Team has entered Rodolfo Ávila and Sam Lok in the final race meeting of the TCR International and TCR Asia series at Macau.
Born in Portugal, Ávila has established himself as one of the most successful racing driver from Macau and since 2009 has emerged as one of the title contenders in the competitive Porsche Carrera Cup Asia. Earlier this year he had the opportunity to drive one of the Asia Racing Team’s SEAT León, winning the opening round of the TCR Asia at Sepang.“The Guia Race is very special for Macau drivers and I am no exception. I know the circuit pretty well, but this is only the second time I race there in a touring car. I'll have to make some adaptations to my driving style, but I will put my head down and do the best I can do for the team that is fighting to win the TCR Asia Teams’ title,"Ávila said.

Sam Lok, from Hong Kong, began racing two years ago in the Lamborghini Super Trofeo Asia; he later competed in the Ferrari Challenge Asia Pacific and the Volkswagen Scirocco Cup China, before returning to the Super Trofeo in which he was classified fourth in the AM Class in the current season.
Lok stated: “This will be only my second time at the Guia circuit. I am happy that Asia Racing Team and StarSpeed Racing offered me the opportunity to take part in this great event. I don’t have high expectations, but I’m looking forward to gain more experience in one of the most demanding circuits in the world. Just participating in the event is already a dream come true for a Hong Konger!”