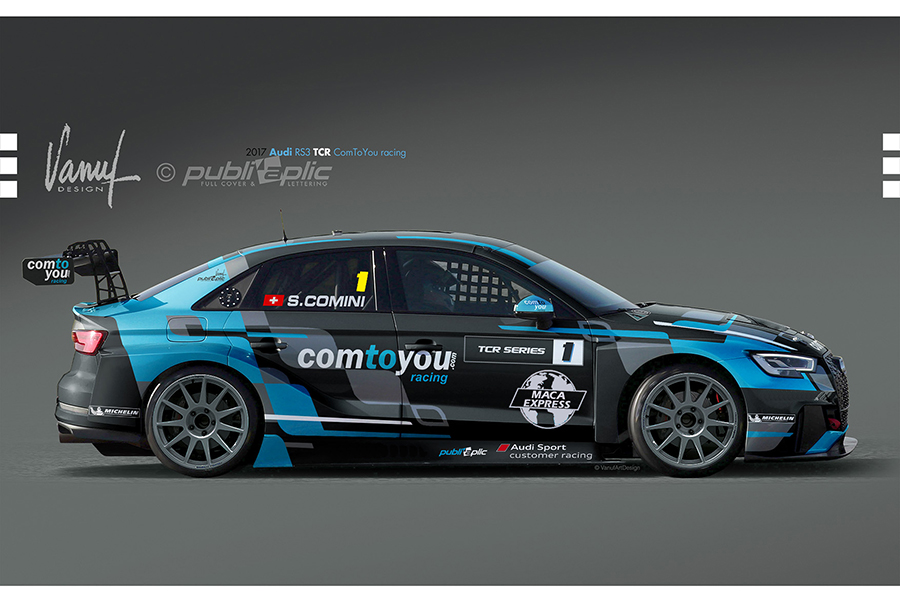 Comini in an Audi RS 3 LMS run by Comtoyou Racing

Double TCR International champion Stefano Comini will defend his title at the wheel of an Audi RS 3 LMS run by Comtoyou Racing.

“I received a number of offers, including the one from Comtoyou Racing… Jean-Michel Baert, the boss of the outfit, has hired François Verbist, whom I know well since we worked together in 2016. I hold him in great esteem and this convinced me this was the best option. This project has been launched at the last-minute and we’ll go to Georgia with very little preparation. There, our goal will be to score as many points as possible. I must say that trying to conquer a third crown in a row, with a third different car brand, is a very exciting challenge!” Comini said.

Based in Waterloo and involved in the European VW Fun Cup since the end of 2015, Comtoyou Racing has seized the opportunity that presented itself. “Sometimes, in life, there are chances you cannot let go. Especially, when all the pieces of the puzzle seem to come together nicely,” acknowledges Jean-Michel Baert, the Team Principal. “This project has seen the light in less than one week! Audi Sport Customer Racing wished to see an Audi RS 3 LMS in the TCR International Series and, as I am a long-time customer with them, they lured me a bit... At the same time, François Verbist was available to organize the team, from a technical and logistical point of view. In addition, Stefano Comini was without a drive a few weeks from the start of the season, and the idea of having the #1 on our car was very appealing. In five days, we have set up everything and fetched the car from Audi Sport Customer Racing at Neuberg. It is now on its way to Georgia.”

Well known for his role at Team WRT since 2010, François Verbist will be a key element in the new organization, contributing all his experience and competence. “It’s crazy how fast this project has taken off! Between the first phone call with Audi Sport Customer Racing and the delivery of the car, only 48 hours had passed. We are happy to have their support, as they wish to showcase the competitiveness of the Audi RS 3 LMS in the global series. Everything has happened very late and, clearly, we’ll need a couple of races to be at the top, but I am sure that we have the best people in the team and that we will make it. On top, with Stefano, we have one of the very top drivers. It is a huge challenge, but we are here to bid for the title!”

The team plans to enter a second car as from the third race meeting of the season at Spa.