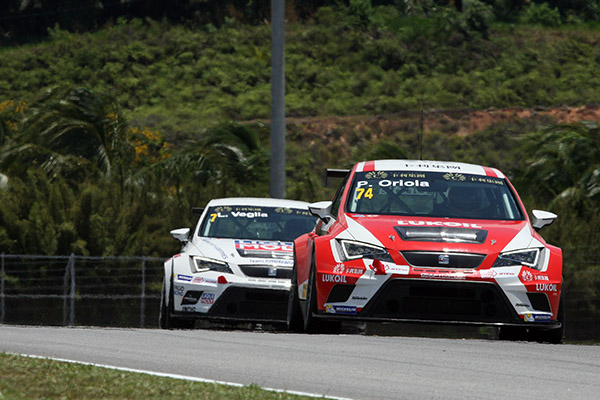 Competitors of the TCR International Series hit the track for the first time in a 20-minute Free Practice at the Sepang International Circuit.
Under the Malaysian sun, SEAT cars set the pace. Craft-Bamboo Lukoil’s Pepe Oriola eventually set the fastest lap of 2:20.780, ahead of Target Competition’s Michel Nykjær (2:21.173) and Andrea Belicchi (2:21.297).
It was hardly a surprise to see the SEAT drivers filling the top seven positions in the time sheet, considering that all the other cars are still at the early stages of the technical development.
Gianni Morbidelli was best of the rest in the West Coast Racing Honda Civic; the Italian driver posted the eighth fastest lap of 2:23.563, while Franz Engstler was 11th in the fastest of the Audi TT car (2:25.117).
The Opel Astra cars and the single Ford Focus missed this first session struggling with teetering problems. Igor Skuz's Astra stalled in the pitlane due to an electrical failure, just like Diego Romanini’s Ford; Jordi Oriola was sidelined by a failure of the water pump in his Campos Racing Astra.
TCR drivers will make their next appearance in the second Free Practice at 16.45 local time.