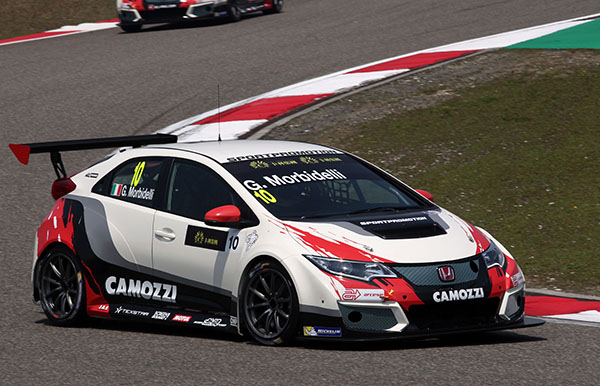 WestCoast Racing’s Gianni Morbidelli and René Münnich posted the fastest lap in today’s first Free Practice session at Shanghai International Circuit.
Morbidelli and his Honda Civic jumped on top of the time sheet from the very beginning, completing a lap of 2:17.770 that was not to be beaten. Actually, no other driver was able to break the 2:18. barrier and eventually Morbidelli’s team-mate Münnich heaved himself up to second place with the time of 2:18.029.
Andrea Belicchi of Target Competition posted the third fastest lap of 2:18.461, emerging as the best in a SEAT León car, ahead of Pepe Oriola (2:18.766) of Craft-Bamboo Lukoil. The third WestCoast Civic of Kevin Gleason was classified in fifth position (2:19.025) after the American had spun at the last turn in the session’s early moments.
Mikhail Grachev placed his Audi TT in eighth place (2:19.307), followed by the newcomer CTCC champion Tengyi Jiang (2:19.361). Current championship leader Stefano Comini had to settle in 11thposition (2:19.621) in his SEAT laden by the 30kg success ballast.
TCR drivers will make their next appearance in the second Free Practice at 17.10 local time.