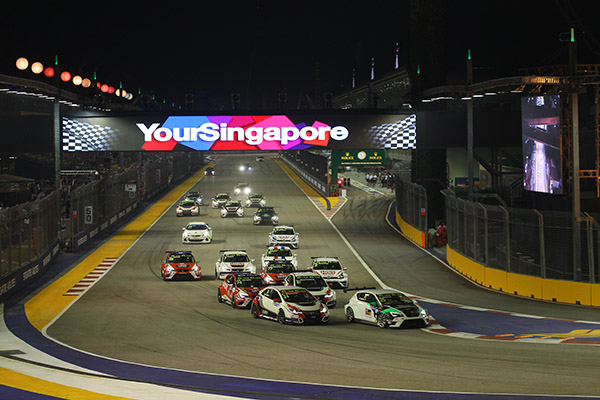 Stefano Comini was set to claim another victory as he had led for most of the distance and built a gap ahead of his competitors, when suddenly Kevin Gleason arrived on his heels and overtook him on lap 8.
The American driver defended the lead in the last two laps and claimed his second victory of the season, while Comini salvaged a valuable second place.
Another close fight took place between Gianni Morbidelli and Pepe Oriola; eventually the Italian crossed the line in third place, inches ahead of his rivals.
Oriola’s teammates Sergey Afanasyev and Jordi Gené came home in fifth and sixth, while Mikhail Grachev kept at bay Lorenzo Veglia and Loris Hezemans to score a brilliant seventh.
Fermando Monje claimed the last point position in tenth. Michael Choi of Prince Racing Team provided the icing of the cake for Honda as he won the race of the TCR Asia Series.
Luca Rangoni managed to complete the race at the wheel of the Top Run Subaru, despite he only hit the track on the formation lap for the race.
The second race will take place tomorrow at 16.35 local time (10.35 CET).

Key moments
Grid – Rangoni’s Subaru makes its first appearance and lines up at the back of the grid, while Ma’s Ford is missing
Warm up lap – Mak loses control of his Opel Astra and hits the wall
Start – Comini sprints to the lead from Gleason and Morbidelli
Lap 1 – Oriola overtakes Morbidelli for third; Chou sends de Souza into a spin
Lap 2 – Oriola, Gleason and Morbidelli swap positions while fighting for second
Lap 3 – Gené overtakes Veglia for seventh
Lap 4 – Morbidelli chases Gleason who is second
Lap 5 – Veglia defends eighth place from Hezemans
Lap 6 – Gené overtakes Grachev for sixth
Lap 7 – Veglia knocks on Grachev’s rear bumper
Lap 8 – Gleason overtakes Comini and jumps into the lead
Lap 9 – Morbidelli and Oriola have a close fight for third
Lap 10 – Gleason beats Comini on the line, while Morbidelli saves third with a short gap on Oriola; Rangoni’s Subaru makes to the end in 15th position, Choi wins the TCR Asia race