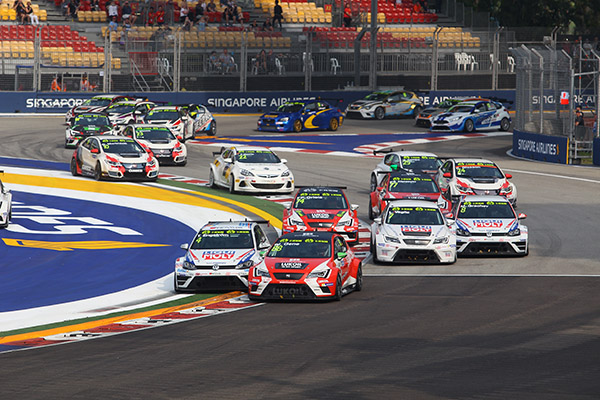 Jordi Gené dominated the second race at Singapore’s Marina Bay Street Circuit.
The Spaniard pipped Tomas Engström at the start, resisted the Swede’s attempt to regain the lead during the first lap and then bid farewell to the rest of the field on his way to claim his third race win of the season.
Behind him, Mikhail Grachev seemed capable of achieving a podium position for the Volkswagen Golf, but in the latest stages the Russian’s pace faded and he dropped down.
Stefano Comini and Pepe Oriola delivered a great show in a fight for the third place that lasted for most of the race; eventually they found themselves promoted to second and third respectively when Grachev slowed down with technical issues.
Gianni Morbidelli managed to score a precious fourth place that keeps him in contention in the fight for the Drivers’ title.
The Singapore event propelled Comini on top of the standings, 11 points ahead of Oriola and 30 of Gené; Morbidelli lies fourth with a gap of 47 points.
Michael Choi of Prince Racing encored his yesterday’s victory in the TCR Asia Series, beating George Chou and Frank Yu; Kenneth Lau crossed the line in third, but was eventually penalized for jump start.
The championship will resume on October 19 and 20 at Buriram, Thailand, for rounds 19 and 20.