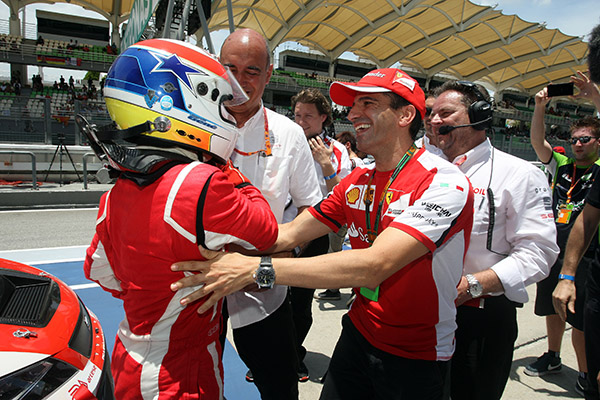 Race 2 – Quotes from the podium finishers

Jordi Gené, 1st: “I am really very happy. I never expected to win in this opening event, first because I haven’t  been racing at this level for two years, then because it was a new circuit for me, and also because in practice and in qualifying I had some power issue in my car due to the heat. But everything went perfectly today. It was a very tough race, as my opponents were extremely close. I just pushed as much as I could. In the last two laps, I started feeling the tyres were suffering, but I could keep everybody at bay. It has been a wonderful debut for the TCR, the level is already extremely high and I am completely convinced we are going to have close and tough racing throughout the season.”
Picture: Gené congratulated by his younger brother Marc.

Pepe Oriola, 2nd: “Two seconds was a good result to start the season and I am quite satisfied. The fight today was just fine, it was fun, but I knew that beating Jordi was going to be difficult. And he proved that he is still a very fast driver. I am really happy for the team, as they did a great job.”

Gianni Morbidelli, 3rd: “I am really happy with this podium finish, it’s a well-deserved reward to the great and hard job made by the team. I feel proud to work for such a squad that put a tremendous amount of effort in the latest weeks. This first weekend also proved how good the TCR concept is, this is the best response to those who did not believe in it. The race today was fun, I had a nice battle in the final lap with Belicchi. He managed to pass me, but then in the very last corner he opened slightly the line and I dived into the gap.”