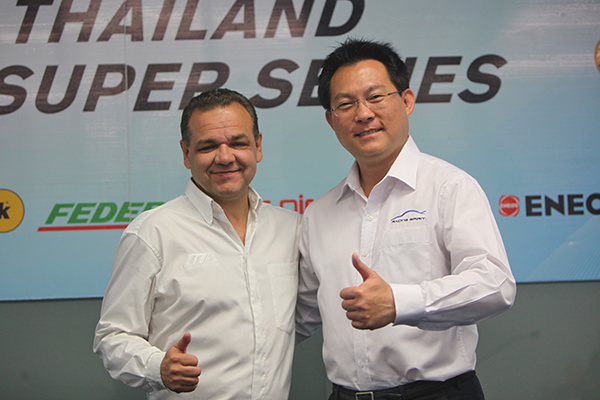 TCR Thailand is moving towards reality

Racing Spirit Co. Ltd., organiser of the Thailand Super Series was among the promoters who first saw the potential of the TCR concept and announced that a TCR Thailand championship will take place in 2016.
The Thai series was presented to the local media in a forum held during the opening round of TSS 2015, in Buriram, where Preeda Tantemsapya, Vice President of TSS, and Paritat Bulbon, Managing Director of Racing Spirit, were joined by David Sonenscher, Chief Executive Officer of Motorsport Asia, the promoter of the new TCR Asia Series.

“Motorsport Asia has a strong working relationship with Racing Spirit, so it was logical that the two sides came together quickly over TCR and with a working relationship having already been well established the implementation of the new series, despite being a big challenge, should be relatively smooth,”said Sonenscher, who added: “We are looking into doing joint races together. So there will be a whole load of cooperation.”

The clock is ticking down fast and in three months the TCR International Series and TCR Asia Series will jointly head to Buriram.
“In October we will bring both championships here, so were planning to do promotions around that in partnership with Racing Spirit,”Sonenscher revealed. “So I think we can offer very good opportunities for people to get up close and touch and feel and drive and do whatever they need to do.”