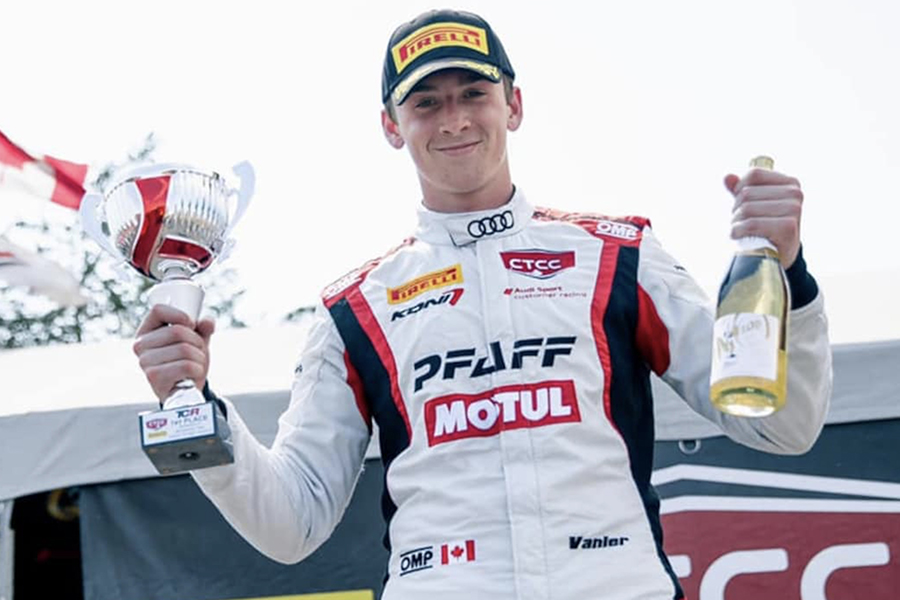 Thirty-seven is the age differential between the 17-year-old Zachary Vanier who was crowned Canadian Touring Car champion today at Calabogie and his predecessor Gary Kwok (54).
On his rookie season in a saloon car, Vanier accomplished his mission like a veteran. At the wheel of his Pfaff Motorsports Audi RS 3 LMS DSG he won all the races but one, the very first of the season at Bowmanville, when he retired from the lead, handing the victory to Kwok. After that he never failed again and struck five consecutive wins.
Vanier made good use of the pole position to lead Race 1 from Travis Hill, Marco Cirone, Gary Kwok and Louis-Philippe Montour. The leader built a two-second margin, while Hill was defending the position from his pursuers. In lap 4, Montour overtook Kwok for P4, while Hill began to close the gap to Vanier. Halfway through the race, Hill and Cirone were on the tail of Vanier’s car, but the latter was able to increase his pace and pulled away, leaving Hill to put in a strong defensive effort for rejecting Cirone’s assault.
The second race saw Vanier on pole again, while Gary Kowk was relegated at the back due to a technical issue in Qualifying. Vanier took the lead and was closely followed by Montour and Cirone, but he managed to keep them at bay, a few tenths behind, until the end.
Kwok recovered from tenth to fifth in the early stages and then spent a few laps behind Hill, until he was able to pass him for P4 in lap 10. However, after the race, Kwok was excluded as his car was underweight.