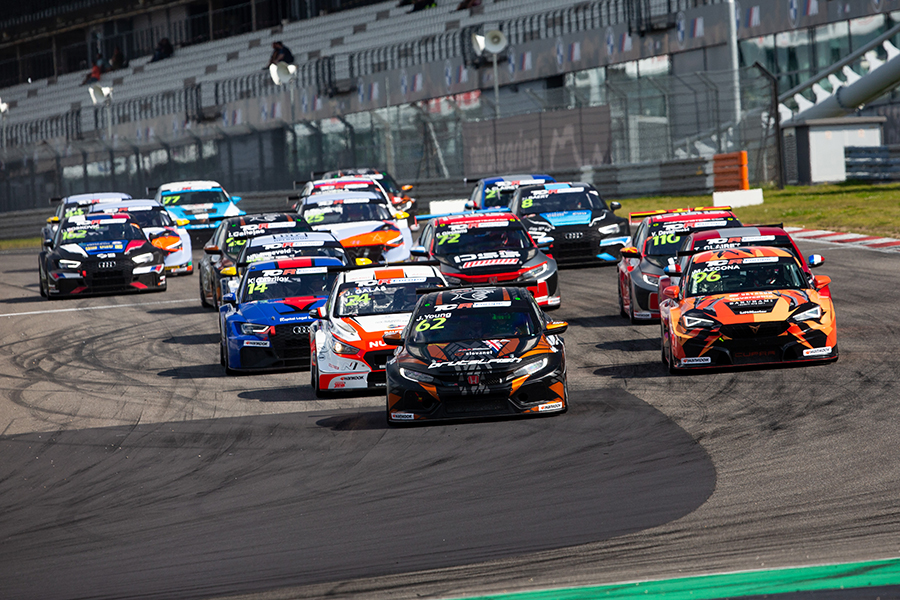 The penultimate event of the 2021 TCR Europe takes place at Monza's legendary ‘Temple of Speed’, with the two races set to field the largest grids of the season.
Twenty-eight cars are entered for the Italian event, with Gustav Birch (Brian Madsen Sport, Peugeot 308) and Łukasz Stolarczyk (BTC Maszyny Racing, Audi RS 3 LMS) returning after previous one-off drives in Zandvoort and the Nürburgring respectively and Evgenii Leonov retaking his seat at Volcano Motorsport after missing the German event. In addition, there will be no fewer than five new faces on the grid, with the Trico WRT Hyundai i30 N of TCR Italy race winner Damiano Reduzzi being joined by a pair of Audi RS 3 LMS cars run by the Horňak-Aditis Racing Team for TCR Eastern Europe drivers Bartosz Groszek and Petr Čižek and Venezuela’s Sergio López and Spaniard Rubén Fernández in two RC2 Junior Team CUPRA Leon Competición cars.
The races at the Nürburgring three weeks ago saw Mikel Azcona (Volcano Motorsport, CUPRA Leon Competición) take back-to-back wins, adding to the identical result at Spa-Francorchamps and his win in the opening race of the season at the Slovakiaring. This means that Azcona travels to Italy with a 37-point lead in the standings over Franco Girolami (PSS Racing, Honda Civic Type R), with Niels Langeveld (Sébastien Loeb Racing, Hyundai Elantra N) in third place, a further 51 points adrift, and Langeveld's teammate the reigning champion Mehdi Bennani another 33 points behind. A total of 180 points are still up for grabs in the two remaining events. Thanks to a rule change this year, however, drivers will drop their two worst scores and so Azcona’s lead is even more commanding as he missed the Zandvoort event and so will not drop any further points.
The Teams’ title will almost certainly be decided this weekend as it’s tough to see anyone beating Sébastien Loeb Racing to the crown; the French outfit are currently 114 points clear of Comtoyou Racing with third-placed PSS Racing 57 points behind Comtoyou and Team Clairet Sport a further 7 points in arrears.
With such a large field and the season building towards its conclusion, Monza is set to host two fascinating and unpredictable races this weekend.
The races will be streamed at www.tcr-series.com; Race 1, Saturday 13:05; Race 2 Sunday 13:30 (CEST).