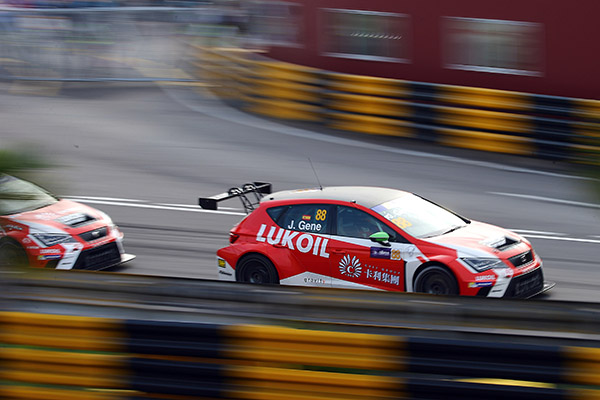 A championship podium for Gené’s comeback

At the beginning of the season, Jordi Gené was facing his full time return in a professional championship, five years after his commitment as a SEAT Sport factory driver in the FIA WTCC.
Despite this long break, the Spaniard proved that he hasn’t lost a bit of his speed and consistency. Driving for the Team Craft-Bamboo Lukoil alongside young lions like Pepe Oriola and Sergey Afanasyev, Genè managed to claim three race wins and to stay in contention for the Drivers’ title until the last event in Macau.

“I had a good race one. I finished second, ahead of Comini and Oriola, but it just wasn’t enough to keep me in the running for the championship. I still had a good chance to win race two though and I was going to do my best to finish the season on a high note. Going into the first corner, Huff and I touched and ended up in the wall.”
After the incident, Gené was brought to the hospital for checks that revealed he had suffered from a cracked rib.
Despite the incident, Gené was classified third in the Drivers’ championship, a very positive outcome for his comeback season.