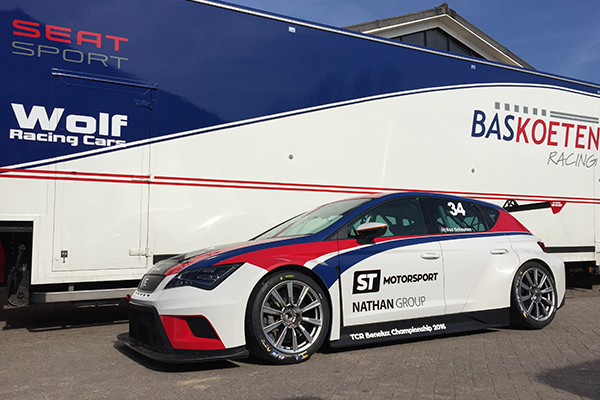 A Dutch new entry for the Valencia event

The forthcoming Valencia event of the TCR International Series will see the debut of a Dutch team: Bas Koeten Racing / ST Motorsport is to enter a SEAT León Racer for rising star Bas Schouten.
The outing will be a real-life test for the outfit, which is planning to contest in 2016 both the TCR Benelux Series and the SEAT León Eurocup and will have three León Racer cars by next year.

Bas Koeten Racing / ST Motorsport, created at the end of 2014, is directed by Bas Koeten, who comments: “We have been following the launch of the TCR concept since its beginning, and we are convinced of the crucial role this category can play in motor racing. Accessible, affordable and recognizable: this is what is needed to create permanent value in motorsport, at national and international level. The initiative brought forward by Marcello Lotti comes at the right time and has the potential to mobilize all key stakeholders (associations, manufacturers , teams, drivers and media) towards a successful launch of the new concept.”

Driver Bas Schouten, who is only 20-years-old, is switching to touring car racing after having competed in Formula Ford and with Wolf and Radical prototypes. The Hoorn-born is delighted ahead of his TCR debut: “Touring car racing is the right direction to take for me at this stage of my career and I want to be perfectly prepared for the TCR Benelux Series next year. Taking part in the first European races of the TCR International Series already this season will help me to do so.”

Interestingly enough, the young man is coached by touring car legend Tom Coronel, who states: “It's great to see that there is already a Dutch team that moves towards the international TCR field. I'm happy to be able to contribute to this initiative. With the right support, driver and partners, this project is bound to a bright future.”