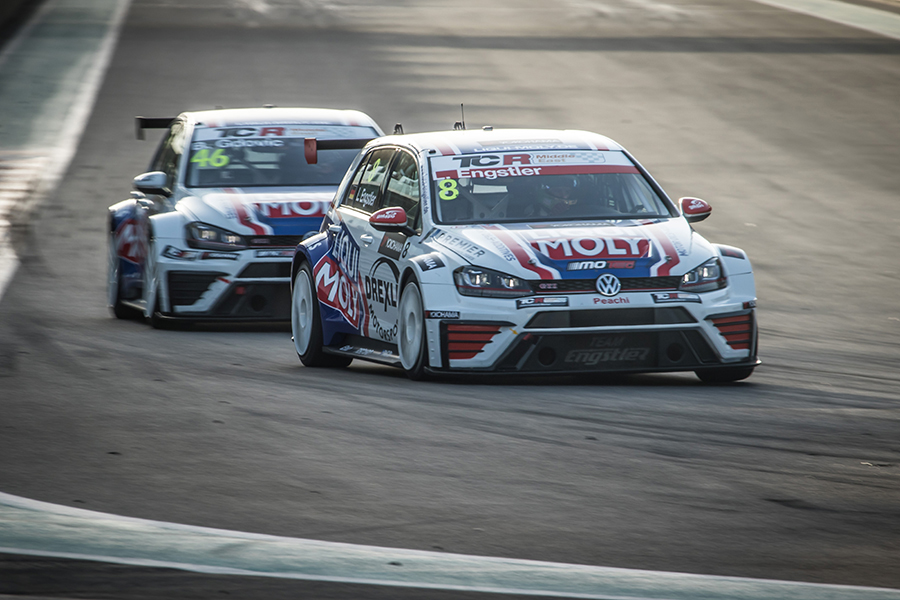 A four-way fight for the inaugural TCR Middle East title

The inaugural season of TCR Middle East will come to an end on Saturday at Bahrain International Circuit, with four drivers in contention to be crowned the series’ first-ever champion.
Liqui Moly Team Engstler’s Brandon Gdovic and Luca Engstler, who shared race victories in the opening event at Dubai at the wheel of their Volkswagen Golf GTi TCR cars, are still on top of the standings, with Gdovic leading by six points ahead of his teammate who turned 17 today.
However, during the second race meeting in Abu Dhabi, a new contender broke into contention: Josh Files in the Honda Civic TCR run by the Dubai-based Lap57 team. The Briton won both races at Yas Marina and climbed to third in the classification, only 12 points behind the leader.
Davit Kajaia is also in contention, thanks to twice finishing second behind Files at Abu Dhabi in the Mulsanne Racing Alfa Romeo Giulietta TCR. However, the gap of 27 points to the leader – when 55 are still at stake – means the Georgian’s hopes are slim.
The upcoming weekend will be packed with action, as the TCR Middle East Series shares the bill with the Middle East Porsche GT3 Cup, the BIC 2000cc Challenge and two Bahraini motorcycling series BSBK and BMR 600.
The TCR Middle East Series will hit the track on Friday, with two 30-minute Practice sessions and a 35-minute Qualifying, while the two 60-kilometre races will take place on Saturday.