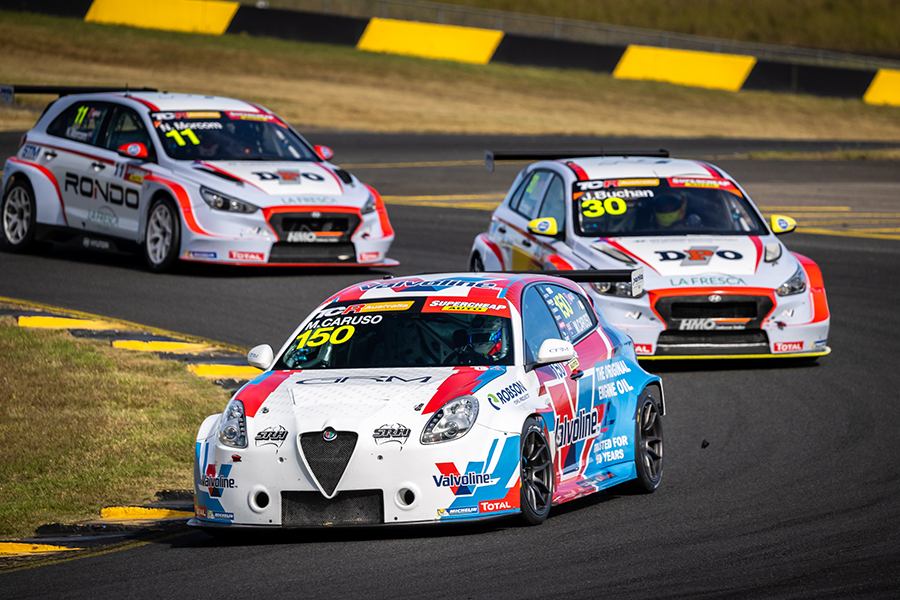 Michael Caruso scored his maiden win in TCR Australia at the end of a third race at Sydney Motorsport Park that was reduced to a two-lap sprint by the safety-car interventions. Caruso’s winning move at the wheel of his Garry Rogers Motorsport Alfa Romeo Giulietta was a lightning start with which he pipped Josh Buchan who was on pole. Buchan finished in second place, completing an amazing weekend after victories in the first two races. The podium was completed by Dylan O’Keeffe who partially made up for the disappointment of the penalty that had prevented him from starting from the pole in yesterday’s Race 1.
Caruso made a mega start, squeezing his Alfa Romeo between the pole sitting Hyundai of Buchan and the pit wall to lead into Turn 1. However, the safety car was deployed during the first lap to recover Jason Bargwanna’s Peugeot 308 that had hit Michael Clemente’s Honda Civic stalled on the grid.
Racing resumed in lap 5, with Caruso leading from Buchan, Nathan Morcom, Chaz Mostert, O’Keeffe, James Moffat, Ben Bargwanna, Luke King, Aaron Cameron and Lee Holdsworth. Jordan Cox had climbed to P15 after starting 22nd on the grid, while John Martin closed the line after starting from the pit lane. The Renault cars of O’Keeffe and Moffat moved into fourth and fifth ahead of Mostert’s Audi, but the safety car was deployed again after Cameron’s Peugeot had crashed at Turn 1 after being squeezed between King’s Audi and Holdsworth’s Alfa Romeo.
The green flag was ready to be waved at the end of lap 8, but the full course yellow continued because Holdsworth’s Alfa Romeo had stopped on the track. Holdsworth was able to restart his car and so racing resumed in Lap 10, with two laps to go as the race was shortened by four.
Caruso held on to the lead, while O’Keeffe passed Morcom for P3 and the two of them began to fight with Buchan for the second place, but the latter was able to keep them at bay until the end. During the final lap, King overtook his teammate Mostert to finish sixth behind Moffat, while Cox completed a stunning recovery, climbing to eighth after passing Tony D’Alberto and Ben Bargwanna
Mostart’s leadership in the standings was increased to 106 points over his teammate King, while Buchan has moved into third a further seven points behind.
TCR Australia will resume at Morgan Park on June 24/26.