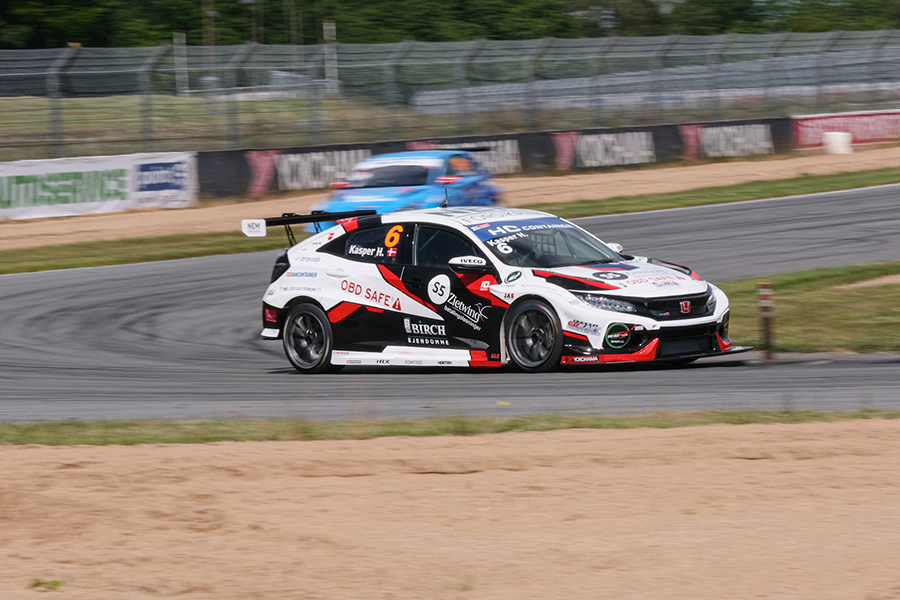 A lights-to-flag win for Kasper Jensen

Kasper H. Jensen inaugurated the TCR Denmark championship with a lights-to-flag victory at the wheel of his Massive Motorsport Honda Civic Type R. Jensen started from the pole position and ran away from the rest of the field, while Martin Andersen tried in vain to stay in touch with the leader and eventually finished second; Jan Magnussen completed the podium in third position.
Jensen said: "I'm really happy. Our hard work along with JAS paid off and this is definitely the result we hoped for. Heat 2 will be interesting, it will be a close battle, so we are eager to see how we get on.”
During the first two laps, Jensen was chased by Nicolai Sylvest, but on lap 3 the latter was given a drive-through for jump-start and rejoined in fifth position behind Michael Markussen. For the rest of the race, Sylvest tailed Markussen, but was not able to steal the fourth position from him.
Another close fight developed for the sixth place with Norwegian youngster Kristian Moe Sætheren (Insight Racing, Alfa Romeo Giulietta) who managed to reject all the attempts from Kim Lund Johansen (Madbull Racing, CUPRA) and René Povlsen (Meteor Racing Volkswagen Golf GTI). During the final part of the race, Povlsen lost the eighth place to Jacob Mathiassen (Insight Racing, Alfa Romeo Giulietta) who completed a great recovery after starting 15th following the technical issues suffered in Saturday’s Qualifying.
Races 2 and 3 will follow in the afternoon at 15:55 and 16:45 (CEST) respectively. Mathiassen will start from the pole of the top-eight reversed grid for Race 2, while the drivers will be placed on the grid for Race 3 according to the number of points scored in the two previous races.