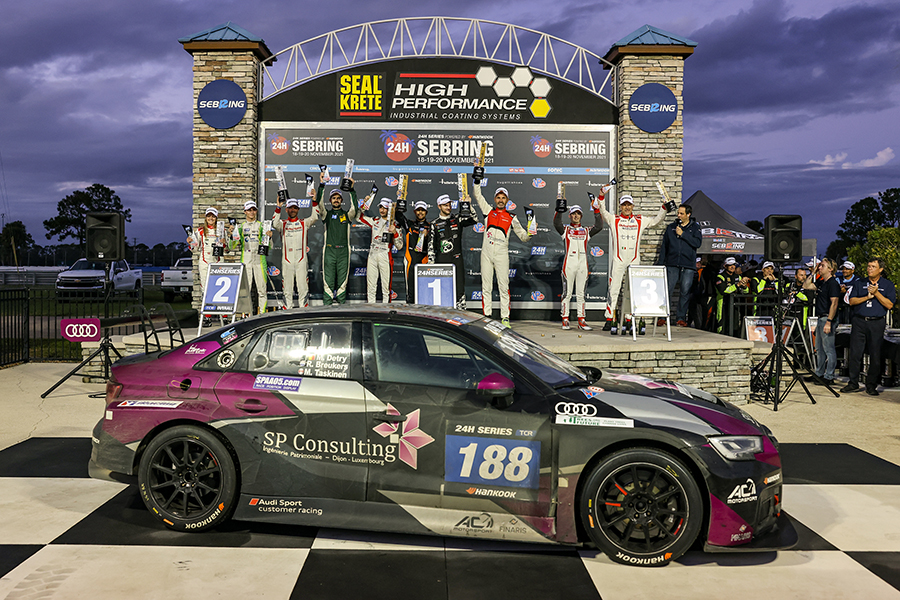 The AC Motorsport Audi RS 3 LMS #188 driven by Stéphane Perrin, Mathieu Detry, Rik Breukers and Matthew Taskinen took a first victory of the season in the final round of the 24H Series at Sebring International Raceway.
However, this was not enough to steal the title from the Autorama Motorsport Volkswagen Golf GTI #1 of Constantin Kletzer, Emil Heyerdahl, Fabian Danz, Jasmin Preisig and Miklas Born that finished second, one lap behind and secured a third consecutive crown for the Swiss team. Only six points split the two teams in the final standings. Kletzer and Heyerdahl clinched the overall TCE Drivers’ title.
The AC Motorsport Audi made a storming start and despite pressure from both Autorama Motorsport Volkswagen cars, held the advantage into the night stages. Come the morning, and even in heavy rain, the Audi and the #1 Golf GTI were still separated by less than two minutes.
En-route to the chequered flag, Mathieu Detry drove the Audi across the line to complete 514 laps of the Florida circuit, beating the #1 Autorama Golf by 1:45 minutes.
Despite suffering two rear suspension failures, which dropped it a few laps off the division’s leaders, the #112 Autorama Motorsport Golf GTI of Kari-Pekka Laaksonen, Antti Buri, Roberto Ferri, Fabian Danz and Miklas Born completed the overall TCE podium.