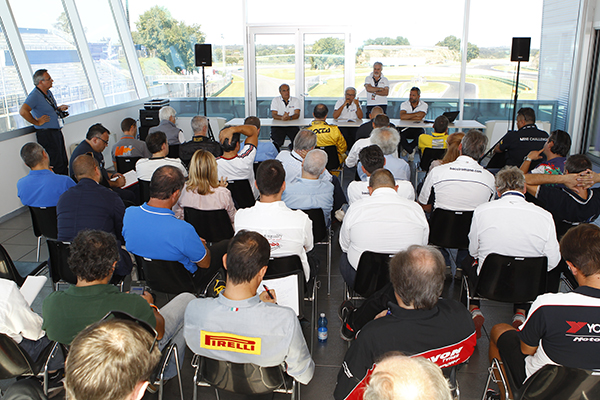 Today at Vallelunga, ACI Sport – the motorsport branch of the Italian National Sporting Authorithy CSAI – launched the TCR Italy that will kick off next year for its maiden season.
In a meeting with representatives of all the teams that are currently competing in the different categories of the ACI Sport Racing Weekend, ACI Sport CEO Marco Rogano introduced the guidelines of the new Italian Touring Car Championship that will be shaped on the TCR technical regulations.
The championship will be composed of seven race meetings, one of them abroad; the sporting format will include two free practice sessions of 30 minutes each, one qualifying session split in two parts of 15 minutes each with a five-minute pause, and two sprint races of 25 minutes plus one lap each.
The grid for Race 1 will be determined by the sum of the best laps set in the two parts of the qualifying session, while the grid for Race 2 will be reversed according to a system that will be communicated later.

“We believe in the potential of the TCR concept and are confident that this is a unique opportunity to revive the tradition of touring car racing in Italy. We will push a lot in promotion and we will offer prize money and benefits to the competitors. Just to give an example, we want to help the winner of the championship to take part the year after in the TCR International Series,” Rogano said.