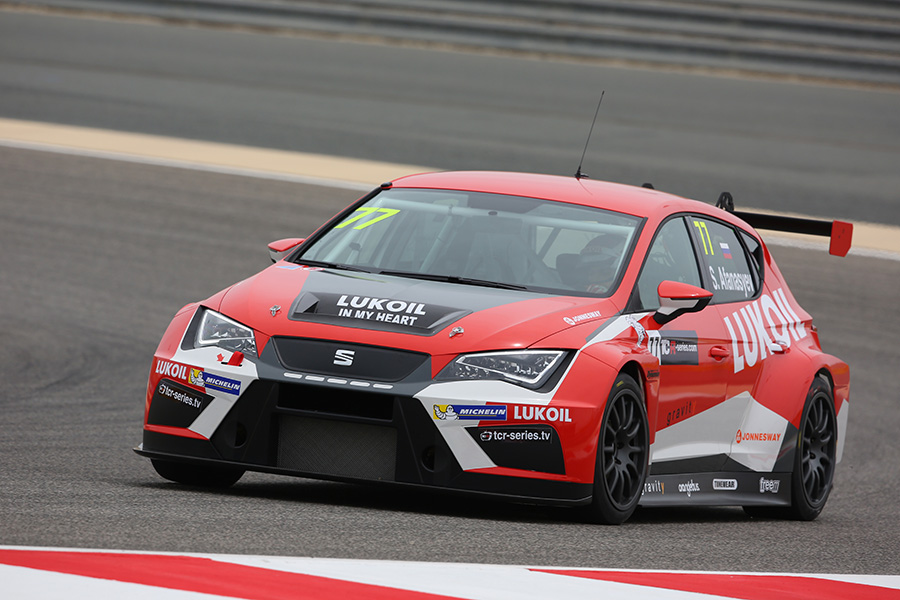 Craft-Bamboo Lukoil’s Sergey Afanasyev claimed his first pole position in the TCR International Series putting in a perfect lap in Q2 that enabled him to beat Dušan Borković of B3 Racing Team and his own team-mate James Nash.
Gianni Morbidelli failed to make the top-three by only two thousandths of a second; Pepe Oriola and Aku Pellinen were placed in fifth and sixth in very close session that saw the fastest six drivers covered by less that two tenths.
Jean-Karl Vernay was the fastest of the Volkswagen drivers, qualifying his Golf Gti in ninth, just ahead of Davit Kajaia who won pole position on the top-ten reverse grid for Sunday’s Race 2.
Jordi Oriola was classified 12th in the only Opel Astra that was admitted to Q2, while Michela Cerruti’s Alfa Romeo Giulietta and Luigi Ferrara’s Subaru STi did not make the cut. Attila Tassi’s SEAT León sat in the pit after the crash in yesterday’s Practice 2.
The first race will start today at 19.30 local time on the distance of 10 laps or 25 minutes.

Qualifying 1: Borković clocks the fastest lap
It was James Nash to post the first significant lap time of 2:13.850 benefitting from the aspiration from Gianni Morbidelli’s car. Aku Pellinen jumped on top a few seconds later with a lap of 2:13.650 with Mat’o Homola second (2:13.693).
The next change saw Morbidelli taking the provisional leadership (2:13.432) with Nash in second (2:13.464) and Pepe Oriola in third (2:13.592).Eventually Dušan Borković emerged as the fastest with a lap of 2:13.107 that was not to be beaten, also because the Subaru STi of Luigi Ferrara stopped on the track with a broken suspension, prompting the yellow flag.
The following drivers advanced to Q2: Borković, Morbidelli, Nash, P. Oriola, Homola, Afanasyev, Kajaia, Vernay, Gleason, Comini and J. Oriola

Qualifying 2: A trio of SEAT cars on top
Morbidelli’s Honda Civic posted a provisional fastest lap of 2:13.753 after the first run of the top twelve. However, the Italian driver was soon ousted by Homola’s 2:13.340.
Soon afterwards Morbidelli struck back and broke the 2:13 barrier stopping the clock at 2:12.652. In spite of this, he was demoted to fourth by a trio of SEAT drivers. Sergey Afanasyev won pole position (2:12.541) beating Borković(2:12.642) by one tenth, while Nash was placed third (2:12.650), eighth thousandths behind the Serbian and two thousandths ahead of Morbidelli.