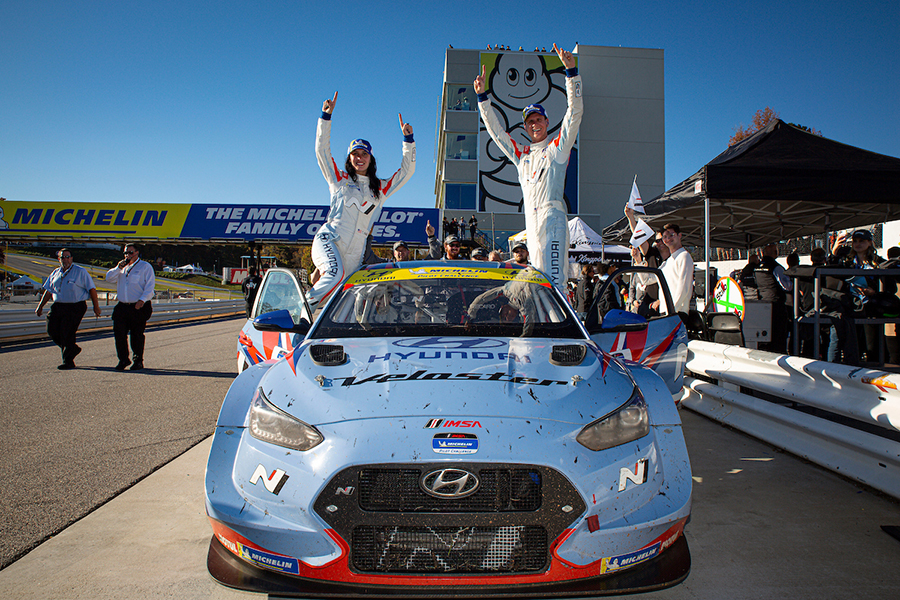 Tim Lewis drove the KMW Motorsports Alfa Romeo Giulietta Veloce through a high-speed traffic jam at Road Atlanta in the last 20 minutes of competition to score the TCR class victory in the IMSA Michelin Pilot Challenge.
With their second win of the season, Lewis and co-driver Roy Block went from seventh to third in the standings, while Taylor Hagler and Michael Lewis, sharing a Bryan Herta Autosport Hyundai Veloster N, finished fifth in the race and clinched the TCR championship. Hagler became the first female driver to win a Michelin Pilot Challenge title and the third straight year for a BHA Hyundai entry to win the title. “It’s a little overwhelming,” Hagler said, “I’m ready to do it again next season.”
The Atlanta Speedwerks Honda Civic Type R FK7 shared by Tyler Stone and Ryan Eversley, emerged from a last-lap scramble to finish second in the race beating the Copeland Motorsports Hyundai Veloster of Tyler Maxson-Tyler Gonzalez by one tenth, while the BHA Hyundai Elantra of Parker Chase-Ryan Norman finished fourth, two further tenths behind and two tenths ahead of Hagler-Lewis. And so, Chase wound up second in the final standings.
“Practice was chippy and we knew we needed to stay in the front and stay out of trouble,” said Tim Lewis. “The team executed flawlessly. They put me out in second or third place after the driver change pit stop and gave me a great car to finish the race.”