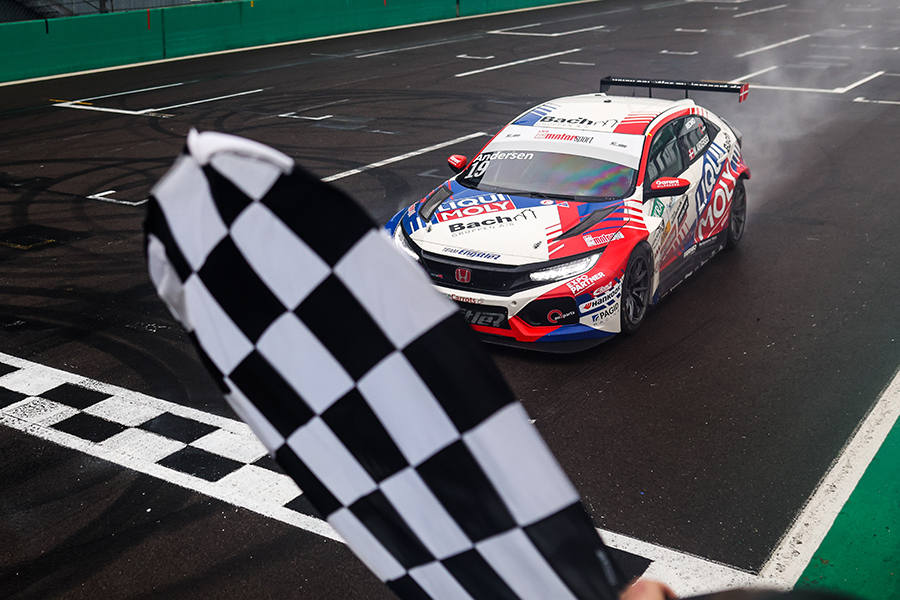 Andersen closes on title with two more wins at the Lausitzring

Martin Andersen has taken two more wins for Team Engstler in the ADAC TCR Germany at the Lausitzring, and now has a proverbial hand on the title after a disastrous weekend for his main title rival Jessica Bäckman.

Race 1 – Andersen secured pole position for Race 1, which was run in wet conditions on Saturday afternoon. The Dane had a slow start from pole, while Bäckman, who started alongside him on the front row, had an even poorer getaway and dropped to sixth. It was Szymon Ładniak from third who shot into the lead, but he was immediately under pressure from Andersen who retook the lead from his teammate on lap three, while Bäckman was dicing with Vincent Radermacker for fifth, swapping positions a number of times. Unfortunately, her race ended just after the Belgian veteran had got back past her, as she spun off into the gravel trap and was unable to rejoin, prompting the safety car on track. Andersen went on to win ahead of Ładniak, while René Kircher finished third, getting ahead of Jonas Karklys soon after the restart on lap eight.

Race 2 – Bäckman had taken pole position for Race 2 ahead of Andersen in a second qualifying session held in the wet, on Saturday. The race though took place in dry conditions on Sunday morning. Bäckman again had a slow start and dropped to fourth, while Andersen and Ładniak moved up to first and second, with Karkly in third. The race was very much a procession up until the final few laps. Andersen had broken away into a comfortable lead, while Ładniak was leading a train of cars comprised of Karklys, Bäckman, and Bäckman’s teammate Robin Jahr. Bäckman was harrying Karklys for third, which saw the Lithuanian pick up the pace and then start to attack Ładniak. The two went side-by-side on lap 19, but Ładniak was able to keep ahead, which meant Karklys had a slow entry onto the main straight and this allowed Bäckman to dive down his inside, and she looked set to steal third. Unfortunately, Jahr also made a dive down the inside, going three-wide into Turn 1 on what was the penultimate lap. Jahr locked up and crashed into the side of Bäckman, spinning her around, while Jahr was out of the race with broken suspension. Bäckman was able to continue, but finished a lowly eighth, while Andersen went on to claim victory ahead of Ładniak and Karklys.

It was Andersen’s fourth consecutive race victory and his fifth of the season; he now leads the standings with a 71-point margin over clear of Bäckman with just two race meetings to go.

The next round takes place at the Sachsenring, where it will be joined by the FIA ETCR eTouring Car World Cup, on September 23/25.