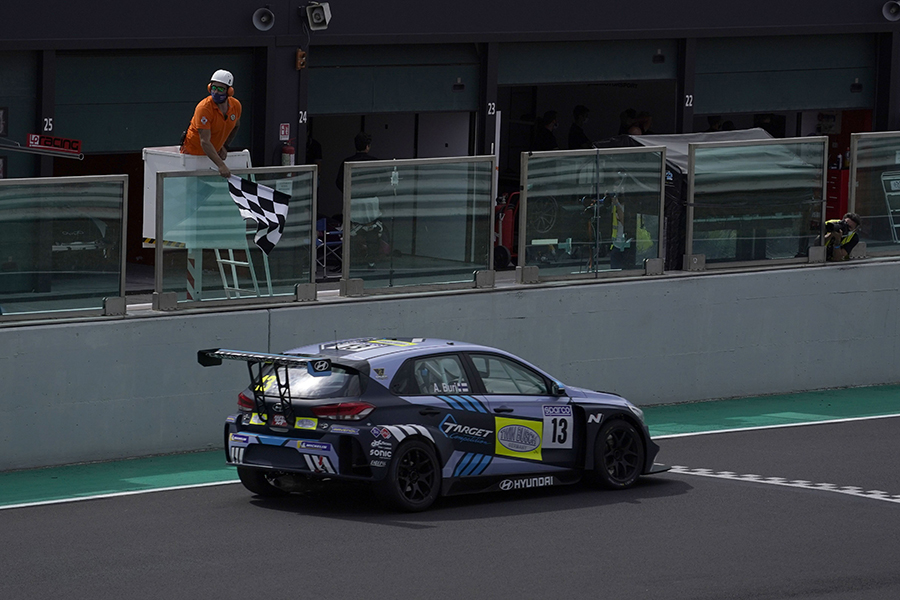 Antti Buri and Nicola Baldan finished 1-2 for Target Competition in an eventful second race of TCR Italy at Misano, with guest driver Jack Young completing the podium for MM Motorsport.
The victory – the first for him in the Italian championship – meant that Buri moved into second in the standings, two points behind Eric Brigliadori. Kevin Ceccon lies third six further points adrift and three ahead of Baldan, while the reigning champion Salvatore Tavano has slipped to fifth with a gap of 16 points to the leader.
Pole sitter Dušan Kouřil could not make the grid due to a technical issue and so Damiano Reduzzi took the lead at the start from P2; behind him Buri moved to the inside of Tavano and passed him for third into Turn 1, then stole P2 from Igor Stefanovski after they made contact.
The safety car was deployed in lap 2 to recover Ettore Carminati’s Hyundai that had crashed; the race resumed one lap later with Buri moving into the lead ahead of Reduzzi; behind them there was a furious battle for P3 between Young, Baldan, Ceccon, Tavano, Franco Girolami and Brigliadori. After a number of clashes and overtaking manoeuvres Tavano led this group but in lap 8 he lost the third place to Young who found himself in second as Reduzzi served a drive-through for a starting procedure infringement.
Buri had built a comfortable leading margin ahead of Young and Tavano, while Baldan managed to pass Girolami for P4 after a thrilling fight. Immediately afterwards, the Argentine’s Honda stopped with a technical issue. Baldan’s progression was not over yet as he passed Tavano for P3 in lap 12.
In lap 14, Federico Paolino’s CUPRA hit Matteo Poloni’s Audi while they were fighting for the tenth position; Poloni spun, was collected by Jonathan Giacon’s Honda and retired, while Paolino was given a 25-second penalty.
The safety car was deployed again to remove debris from the track and the green flag was waved for the two final laps. Buri’s lead was not in danger, as Young and Baldan were fighting behind him. Baldan took the inside into the last turn and pipped Young on the line by three-tenths to finish second. Behind them Tavano crossed the line in fourth position but was given a 25-second penalty for unfair driving behaviour and so dropped to 15th, while Ceccon and Brigliadori advanced to fourth and fifth respectively.
The next event will be at Vallelunga on June 26/27.