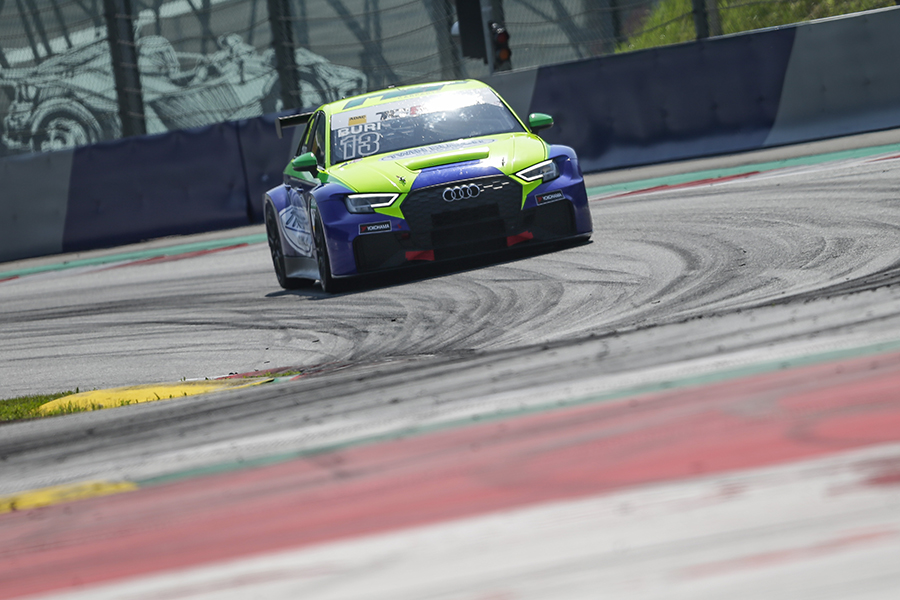 Finland’s Antti Buri, driving the LMS Racing Audi RS3 LMS, took victory in Race 2 at the Red Bull Ring, holding off the reigning champion and winner of Race 1 Harald Proczyk, with pole-sitter René Kircher completing the podium places.
Just as in Race 1 on Saturday, the opening moments of the race proved decisive. Michelle Halder, starting from second on the grid, made a better start than Kircher and so went into Turn 1 in the lead, with Buri having passed Dominik Fugel to lie in third place. Guest driver Gabriele Tarquini briefly snatched P3 from Buri before contact with another car allowed the Finn to reclaim the position.
Buri then passed Kircher’s Audi for second place on Lap 2, followed swiftly by the Volkswagen Golf of Mitchell Cheah who moved into third position. Racing was then put on hold for several laps after the safety car was deployed while Dominik Fugel’s car was recovered following contact with the Opel Astra of Jan Seyffert.
Racing resumed on Lap 7, with Buri immediately attacking Michelle Halder for the lead. Going into Turn 1, the Audi eased past the Honda on the inside line, with Cheah also passing as Halder was forced to run slightly wide. Following a slight contact, Proczyk then also passed Halder for P3, with the Profi-Car Team driver dropping from the lead to P4 in the space of less than a minute.
Several drivers incurred penalties for infringements, with Bradley Burns given a drive-through for pushing another car. At the head of the field, and during a tense battle with Buri for the lead, Cheah also received a drive-through after it was judged that he had jumped the start. The penalty saw the Malaysian drop from second place to eventually finish the race in tenth position and meant that Proczyk moved into P2.
It also took the pressure off Buri, who now had a comfortable advantage at the head of the field. Proczyk was too far back to make any inroads into that lead, while there were also sizeable gaps between Proczyk, Kircher and Michelle Halder. Things were a lot closer in a five-way battle for fifth to ninth, although it seemed that every time Julien Apothéloz passed Mike Halder for eighth place, Halder would retake the position at the very next corner.
So Buri took his third win of the season, maintaining his 100% record of winning the second race at every event, beating Proczyk by 6.7 seconds. Kircher’s third place meant there were two Audi cars on the podium, while Michelle Halder and Max Hesse completed the top five. The remainder of the top ten places were occupied by Lukas Niedertscheider, Théo Coicaud, Mike Halder, Julien Apothéloz and Mitchell Cheah.
Buri stretched his leadership in the standings to 13 points over Proczyk, while Mike Halder is third, a further 18 points adrift.
TCR Germany will now take a two-month break before racing at Zandvoort on 9/11 August.