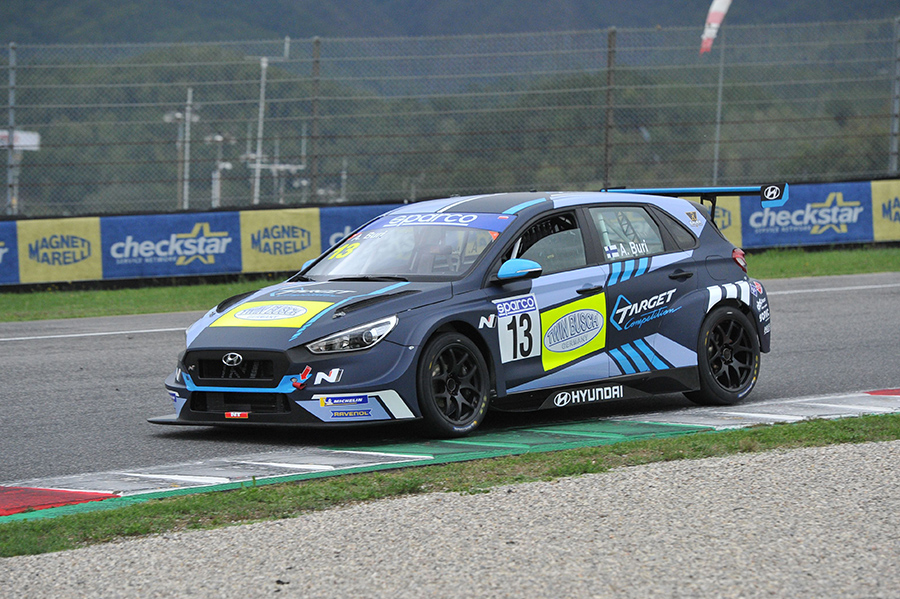 Target Competition’s Antti Buri will start from the pole position in the first race of TCR Italy’s finale at Mugello. The 2020 ADAC TCR Germany champion has beaten his fellow Hyundai driver Kevin Ceccon by two tenths, while the other title contenders, Eric Brigliadori, the current leader Nicola Baldan and the reigning champion Salvatore Tavano have qualified third, fifth and ninth respectively.
Brigliadori, who has shifted back to the Audi RS 3 LMS after racing a Hyundai i30 N in the previous event at Imola, topped the timesheet in the early stages with a lap of 1:57.197, with Buri second a little more than one tenth behind.
Five minutes into the session, the red flag was waved and when action resumed, Ceccon posted a stunning new fastest lap of 1:55.573.
In the following minutes, several drivers improved, but no one was able to beat Ceccon’s time. Brigliadori (1:55.637) advanced to second, Buri (1:56.037) to third and Baldan (1:56.288) to fourth.
Then, in the dying minutes, after Ceccon and Brigliadori had failed to improve, Buri jumped to the top with a 1:55.331 that he nearly matched in the following lap (1:55.335), stealing the pole from Ceccon.
The last one to improve was Ruben Volt (1:56.271) who moved into P4, demoting Baldan to fifth by 17 thousandths of a second.
In the standings, Baldan has now a margin of 16 points over Tavano, while Buri and Ceccon are 18 and 19 points behind the leader; the fifth-placed Brigliadori has a gap of 42 points.
Sunday races will be streamed live at www.tcr-series.com; Race 1, 10:40; Race 2, 16:40 (CEST).