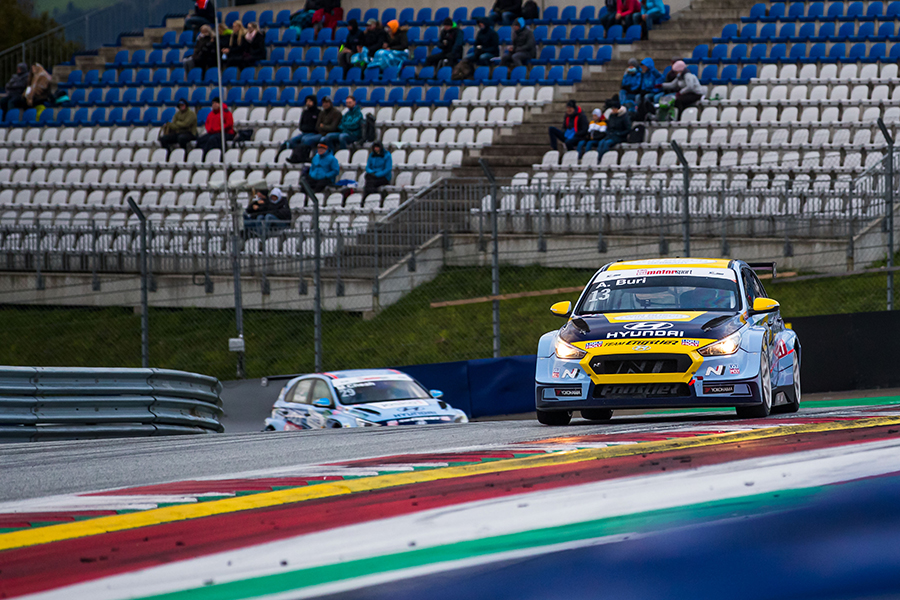 For the second time in the TCR Germany’s weekend at the Red Bull Ring, Antti Buri crossed the finishing line in first position. However, unlike yesterday when he was stripped of the victory by a 30-second penalty, this time the Finn driver took his second win of the season in an authoritative way.
Behind him, Harald Proczyk won a crucial fight with Dominik Fugel for the second position and so stretched his leadership in the standings to 12 points over Fugel, while Buri in third position is only a further five points adrift.
Dominik Fugel sprinted well from the pole ahead of René Kircher who found himself squeezed between Buri and Patrick Simon into Turn 1; as a consequence, Kircher lost a few places while Buri moved into P2 and was followed by Proczyk, Simon and Sandro Soubek. The latter passed Simon for P4 in lap 2 and two laps later overtook his fellow Austrian countryman Proczyk for P3.
At the start of lap 5, Buri closed the gap to Fugel and began to attack him, while Soubek was also getting closer to the leading duo. Mitchell Cheah pulled up with a technical issue while he was running in sixth position and the safety car was deployed.
Race resumed in lap 8 with Fugel closely chased by Buri, Soubek, Proczyk and Simon. At the beginning of lap 9, Buri passed Fugel for the lead on the outside line at Turn 1, moments later Soubek too tried to pass Fugel, but he clashed with Proczyk, went wide and dropped from third to fifth, behind Simon.
In lap 11, Fugel was now under attack from Proczyk and tried to defend the second place, closing the gaps in all the turns, which enabled Buri to run away. Soon Simon and Soubek joined Fugel and Proczyk in the fight for P2. At the end of lap 15, Prozcyk took the inside line into the last turn and passed Fugel for second, behind them Soubek took the opportunity to pass Simon for P4.
The first five positions did not change, while Albert Legutko was classified sixth and Marcel Fugel beat Jan Seyffert for P7.
The penultimate event of TCR Germany will be held at Zandvoort on 30th October/1st November.