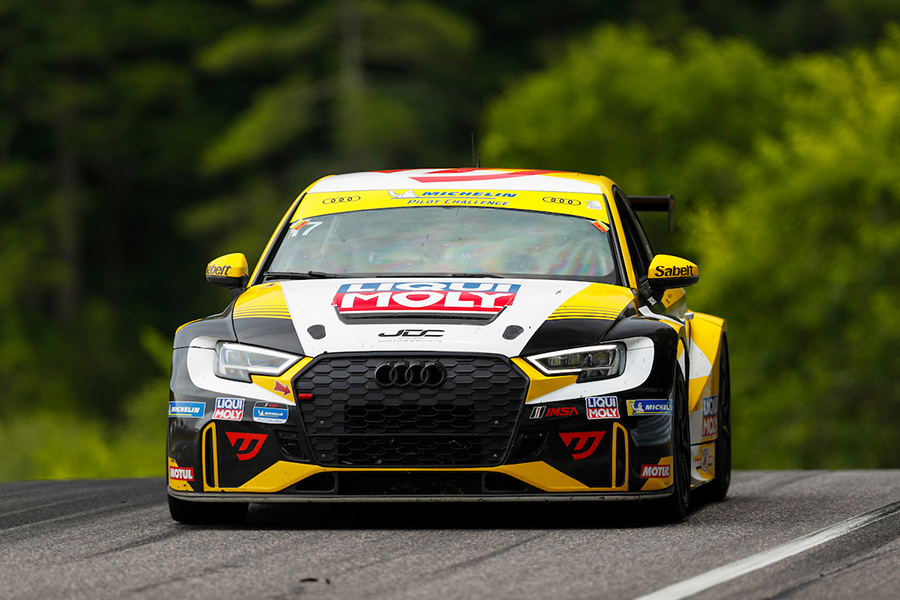 Chris Miller and Mikey Taylor won the TCR class in the seventh round of the IMSA Michelin Pilot Challenge, a two-hour race at Lime Rock Park, in their JDC-Miller Motorsports Audi RS 3 LMS. They won by 1.148 seconds over the Belgard & Techniseal Racing Audi shared by Preston Brown and Denis Dupont.

Miller was running third in class 20 minutes into the race when he was knocked off course and fell to last in the field. He turned the car over to Taylor a little more than 20 minutes later. A lightning-fast pit stop advanced Taylor to seventh and he charged forward from there. Another stop, just before the second and final full-course caution, allowed Taylor to cycle into second place when racing resumed with 33 minutes to go.

Taylor bumped his way past Jonathan Morley in the Road Shagger Racing Audi and into the TCR lead with 25 minutes left on the clock. But the mission was far from finished as the top five cars jostled for positions, often clustered within a second. Contact between the JDC-Miller Audi, the van der Steur Racing Hyundai Veloster N and a GS class car nearly disrupted the race for all three cars, but they continued.

Tyler Gonzalez in the van der Steur Racing Hyundai made a final charge at Taylor with 90 seconds remaining. Gonzalez attempted an over-under pass for the lead in Turn 1 and the cars made side-to-side contact several times through Turns 2 and 3 before the Hyundai sustained left-rear damage and limped back to the pits, which promoted the Belgard and Techniseal Audi to second and the Michael Johnson Racing Hyundai Elantra N of Michael Johnson and Stephen Simpson to third, just 0.350 seconds behind the second Audi.

The Michelin Pilot Challenge returns to action August 5/6 at Road America, with a four-hour race.