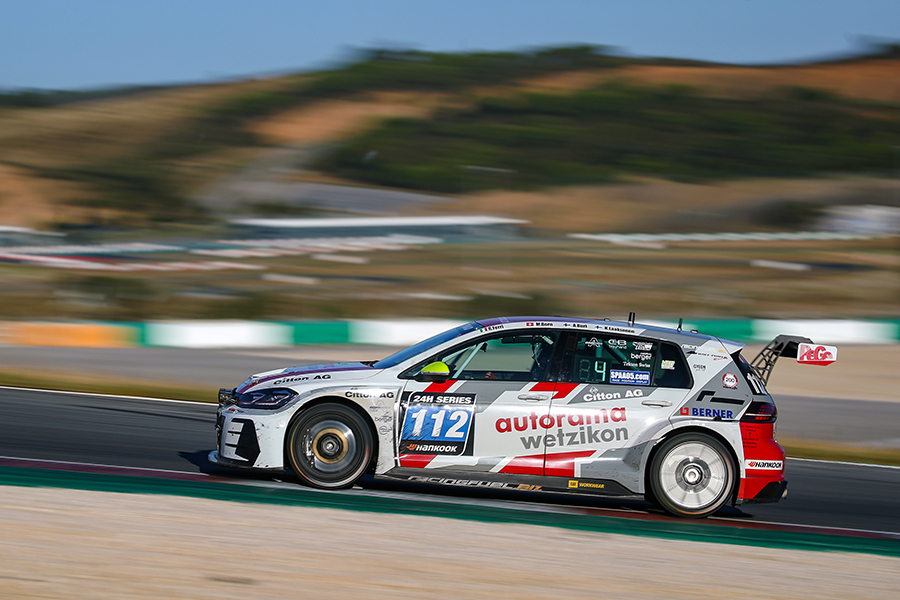 For the second year running the Autorama Motorsport by Wolf-Power Racing Volkswagen Golf GTI has emerged victorious in a hotly contested battle for TCE victory at the 24H Portimão. Roberto Ferri, Miklas Born, Antti Buri, Kari-Pekka Laaksonen and Yannick Mettler shared the wheel of the winning car and the latter collected the chequered flag after completing 663 laps of Autódromo Internacional do Algarve to secure the first victory of the season for the reigning TCE Teams champion in the 24H Series Europe.
During the race, the #112 Volkswagen was one of four different TCR cars to take the lead in the TCE division. The Comtoyou Team Audi secured second in class with the Audi RS 3 LMS car driven by Tom Coronel, Nicolas Baert and Nathanaël Berthon after spending much of the first half of the race battling for the TCE lead with the Red Camel-Jordans.nl CUPRA that Ivo Breukers shared with his sons Rik and Luc.
Unfortunately, the Dutch team retired when the CUPRA’s engine expired shortly before daybreak, while the Comtoyou Audi dropped to second after losing 25 minutes in the pits during the night.
Such was the pace of the leading TCE contenders, that both Autorama Motorsport and Comtoyou Team Audi finished fourth and fifth overall behind three GT cars.
After a character-building run, the AC Motorsport Audi RS 3 LMS completed the TCE podium. The Belgian team, which took its maiden TCE victory at the season-opening 24H Dubai in January, weathered paddle shift issues, a drop in fuel pressure and brake problems to claim third in class ahead of the CODE Racing Development Volkswagen Golf GTI. The second Autorama Motorsport Volkswagen Golf GTI was well in contention for victory during the night, but ultimately fell back to fifth in class after a gearbox change cost the team more than 2.5 hours in the pits.
The next event of the 24H Series will be the 12H Monza on July 10th/11th.