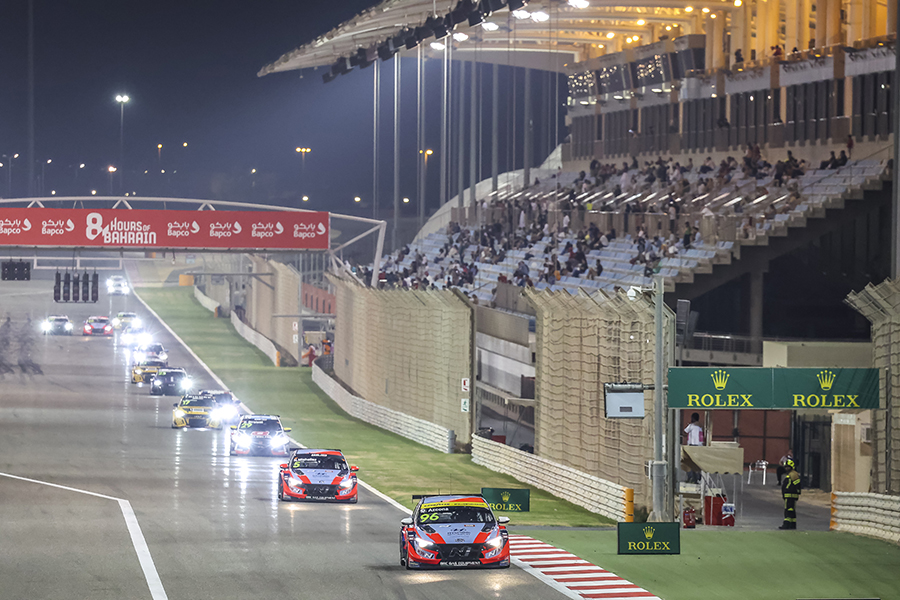 In the floodlight of Bahrain International Circuit, Mikel Azcona and Norbert Michelisz dominated WTCR’s first race. Pole sitter Azcona led from the start, with Michelisz covering his shoulders; this was the fourth victory of the season for the Spaniard who stretched his leadership in the standings over his closest rivals Néstor Girolami and Nathanaël Berthon, fourth and third under the chequered flag. Azcona now leads by 53 points over Girolami and 94 over Berthon who has equalled the score of the absent Rob Huff.

Azcona made good use of the pole and led at the start, while Berthon, second on the grid, had a slow getaway and dropped behind Michelisz, Girolami, Attila Tassi and Nicky Catsburg. During the first lap, Catsburg was sent into a spin by Franco Girolami and collected Gilles Magnus who had started from the back following an engine change. Magnus retired, while Catsburg rejoined at the bottom of the field; the incident resulted in a ten-second penalty for Franco Girolami.

In lap 2, Berthon passed Tassi for P4; the latter lost another place to Mehdi Bennani and then was hit by Tom Coronel, dropping further. Berthon overtook Néstor Girolami in lap 4, moving up to third and leaving the Argentine grappling with Bennani and Coronel. In lap 8, Coronel passed Bennani for fifth and began putting the pressure on Girolami, eventually passing him in lap 10. In the meantime, Catsburg had recovered after the early spin and passed Bennani, advancing to P6.

Berthon tried in vain to close the gap from the leading pair and had to settle for third ahead of Coronel, who was later dropped to sixth, behind Girolami and Catsburg, by a five-second penalty for the collision with Tassi.