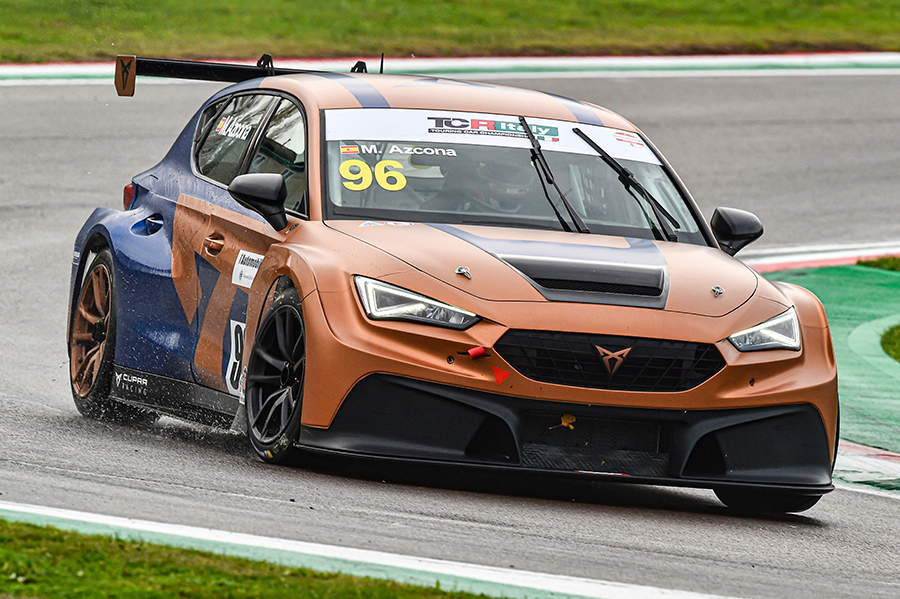 Azcona dominates Imola’s Race 1, as Tavano is closer to the title

TCR Italy’s guest star Mikel Azcona dominated the first race of the season finale at Imola in one of the CUPRA Leon Competición cars run by the Scuderia del Girasole. His teammate and reigning champion Salvatore Tavano recovered from P20 on the grid to finish seventh and so moved closer to a third consecutive title.
At the start, Jacopo Guidetti took the lead from the pole ahead of Jonathan Giacon and Eric Brigliadori, but as the two MM Motorsport’s drivers battled for the lead, they opened a gap that Azcona – started from P8 – was swift to use and passed them both. The young Spaniard immediately pushed to create a gap, leaving his rivals to fight for the other podium places.
In lap 2, Giacon overtook Guidetti for second, while Brigliadori followed them in fourth place and Felice Jelmini was defending the fifth position from Nicola Baldan. Meanwhile, Tavano had already recovered from P20 on the grid to P10.
In lap 4, Brigliadori’s hopes to become champion suffered from a crucial blow as the points leader slowed down, pitted and retired with a technical issue. One lap later Jelmini passed Guidetti for third and tried to close the gap to Giacon.
In lap 10, Marco Pellegrini – another title contender – spun off and dropped from fifth to 11th.
Ibragim Akhmadov moved into P5, while Igor Stefanovski managed to pass Baldan for P6; one lap later Baldan retired.
Azcona won with a 7-second margin from Giacon who successfully defended the second position from Jelmini; Guidetti and Akhmadov finished fourth and fifth.
With only the last race left and 26 points for grasp, Tavano has retaken the leadership in the standings, with a margin of eight points over Brigliadori; they will start from P20 and P7 respectively.
The race is scheduled to start tomorrow at 12:40 local time (CET) and will be streamed live at www.tcr-series.com.