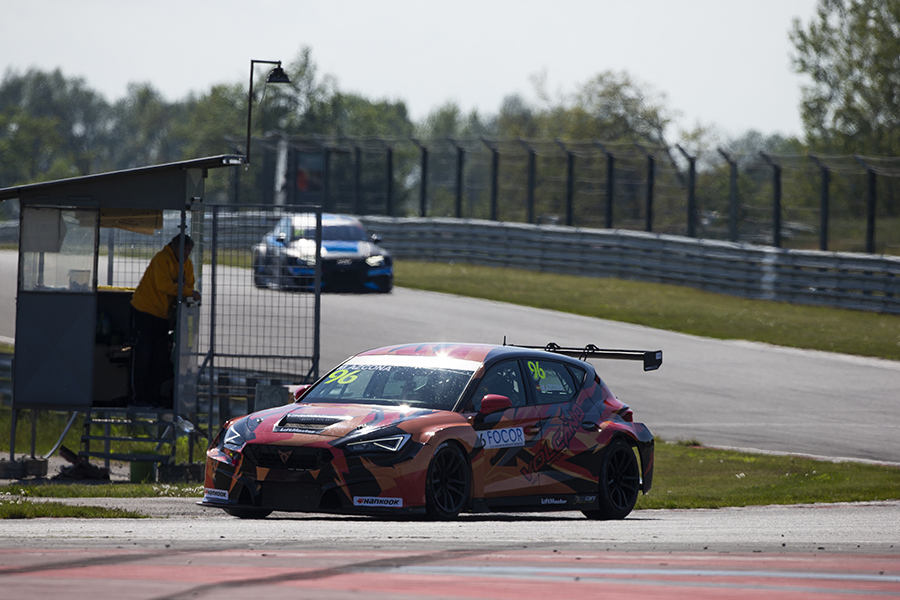 Azcona makes a winning start to the TCR Europe season

Mikel Azcona took a dominant victory in Race 1 at the Slovakia Ring in his Volcano Motorsport CUPRA Leon Competición car, beating the Comtoyou Racing Audi RS 3 LMS of Nicolas Baert to the chequered flag by 3.370 seconds.
Local fans received an early disappointment when the Hyundai i30 N of Mat’o Homola had to be pushed off the grid due to a possible recurrence of the fluid leak that had earlier forced the Slovakian driver to miss the second stage of Qualifying.
At the start, Azcona got away more cleanly than pole-sitter Tom Coronel and led the field into Turn 1. The Spaniard was then never headed and set off into the distance leaving several drivers to battle for the other podium places. Coronel’s teammate Dušan Borkovič also made a relatively poor start and dropped from fourth on the grid to tenth. An incident early on the opening lap saw Russia’s Klim Gavrilov caught up with a number of other cars and the VRC-Team Audi was forced to retire.
Coronel was running in second place until Lap 4, when he was passed by Baert; then on the following lap, Coronel lost more positions when Dániel Nagy and Niels Langeveld both overtook him. Mehdi Bennani, who had started from P10, moved into seventh place when he passed Felice Jelmini in a sister Sébastien Loeb Racing Hyundai Elantra N.
On Lap 6, Isidro Callejas had a huge scare when he ran onto the grass and the rear of the car was kicked into the air when he hit a large bump. Although the car initially seemed undamaged by the incident, Callejas would be forced to pull up in the race’s final moments with broken suspension.
Together with Borkovič steadily recovering and moving up the field, the attention over the final few laps was on the battle for third place. Langeveld had recovered superbly after starting from P13 on the grid and was threatening Nagy for third position, but the Hungarian driver held on to claim a podium finish behind Azcona and Baert.
With his victory, that was also the first one for the new CUPRA TCR model in the European series, Azcona took the lead in the standings, six points clear of Baert.
Race 2 will start tomorrow at 13:55 local time (CEST) with Sébastien Loeb Racing’s teammates Mehdi Bennani and Felice Jelmini sharing the front row in their Hyundai Elantra N cars; live streaming at www.tcr-series.com.