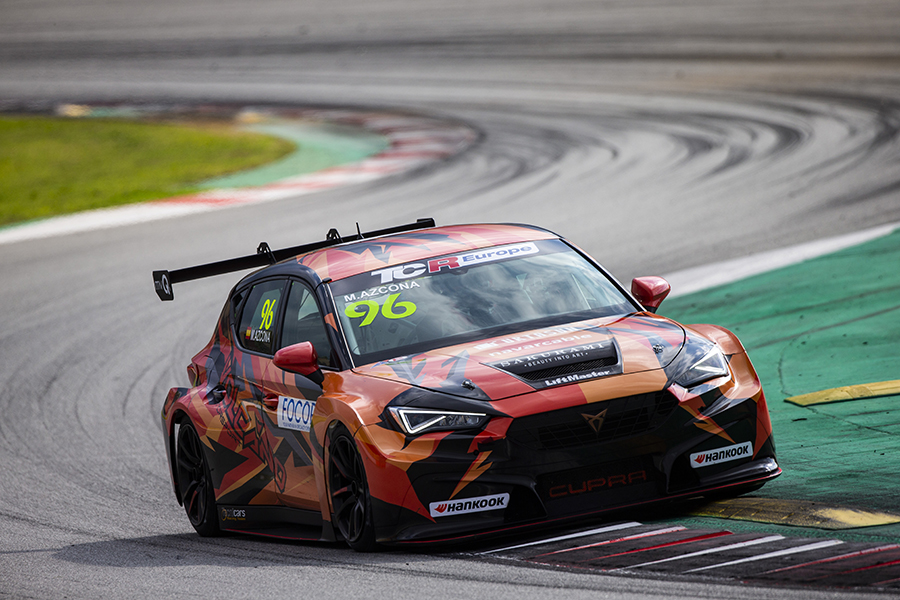 Azcona on pole in TCR Europe, as Girolami will start last

There were very mixed fortunes for the two drivers battling to win the 2021 TCR Europe title in the two-part Qualifying session in Barcelona. Series leader Mikel Azcona qualified his Volcano Motorsport CUPRA Leon Competición on pole for Race 1, but Franco Girolami – second in the championship – saw his title hopes take a severe knock when he failed to set a lap time due to a technical issue and so his PSS Racing Honda Civic Type R will start both races from the back of the grid.
Both Azcona and Tom Coronel had flown into Barcelona on Friday night after the WTCR Qualifying session at Most in the Czech Republic, where Azcona had claimed his first pole of the weekend. The late-night dash didn’t seem to have affected Coronel, however, as he was the first driver to set a competitive lap time in Q1 (1:57.970). His stay at the top of the timesheet was short-lived, though, as Sami Taoufik (1:55.873) and Jack Young (1:55.466) soon displaced him. The other TCR ‘commuter’, Azcona, then went fastest with a lap of 1:55.439 with Mehdi Bennani (1:55.746) briefly going P3 before being replaced by his teammate Niels Langeveld (1:55.482).
A number of drivers had laps cancelled due to track limit infringements, including Gilles Colombani, Coronel, Young, Nicolas Baert, Evgenii Leonov, Felice Jelmini and Teddy Clairet. The biggest surprise, though, was that Girolami had his best lap of 1:55.760 cancelled before the Argentine driver headed to the pits with a problem with the cars’ water pump belt with around nine minutes remaining.
Taoufik then went P2 (1:55.376) before Baert (1:55.135), Jimmy Clairet (1:55.147) and Teddy Clairet (1:55.165) claimed the top three places. With a little over a minute left on the clock – and with Girolami still in the pits – Azcona set a stunning fastest lap of 1:54.765. Going through to Q2 were Azcona, Baert, the Clairet brothers, Taoufik, Bennani, Klim Gavrilov, Young, Langeveld, Martin Ryba, Isidro Callejas and Leonov.
The ten-minute Q2 then saw Taoufik (1:55.310), Ryba (1:55.738) and Young (1:55.866) set the top three times on their first flying lap, while Azcona headed into the pits for a tyre change after his out lap. Teddy Clairet then went P1 with 1:55.106 before Taoufik improved with a lap of 1:55.036. Again, a number of drivers fell foul of track limits: Bennani, both the Clairets and Young had laps deleted.
With less than two minutes of the session remaining, Azcona began his bid to set the fastest lap. Despite not having driven at his home circuit for some time, Azcona grabbed pole position for Race 1 with a lap of 1:54.992, just 0.044 faster than Taoufik. Teddy Clairet and Nicolas Baert will start Race 1 from the second row on the grid while Azcona’s new teammate Gavrilov will start the reversed-grid Race 2 from pole.
The result meant Azcona took the maximum ten Qualifying points and so extended his lead over Girolami in the standings to 63 points – effectively 70, as Girolami has to drop his weakest score of 7 points. Fourth-placed Langeveld, meanwhile, has narrowed the gap to Coronel to 8 points.
The first race will be streamed live today at www.tcr-series.com; 15:40 local time (CEST).