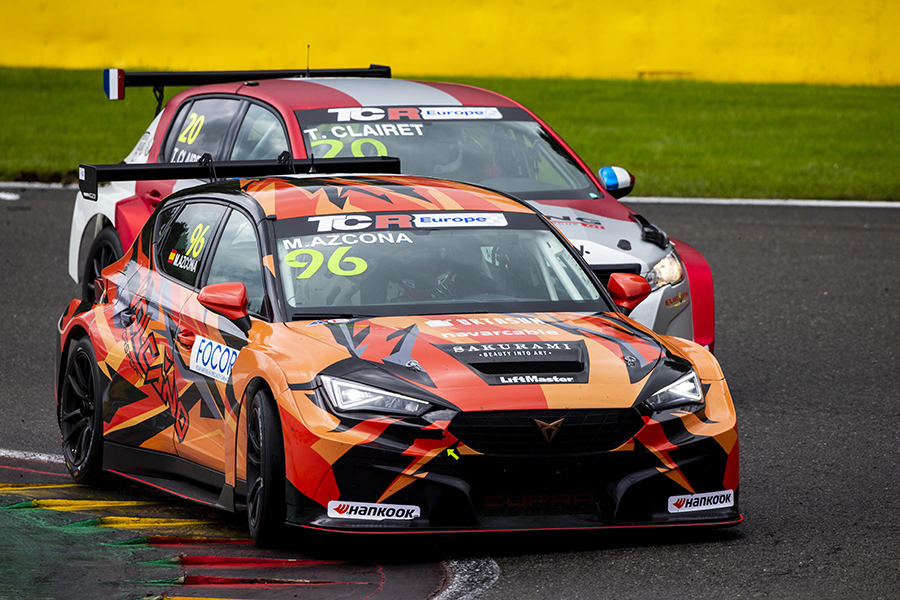 Azcona takes another double victory in TCR Europe at Spa

In a repeat of his result at Spa-Francorchamps last year, Mikel Azcona won both TCR Europe races at the Belgian circuit to extend his lead in the standings. Mat’o Homola finished second, his best result in the current season, passing Teddy Clairet on the final lap.
With rain clouds building as the cars headed for the grid, the race started behind the safety car. Tyre choice was going to be an issue, with most drivers opting for a mix of slicks and wets although pole-sitter Klim Gavrilov went for wets all round and Homola chose to fit four slicks. After the first of two laps behind the safety car, three drivers dived into the pits to change rubber: Jack Young, Martin Ryba and Jimmy Clairet.
When the safety car peeled into the pits, Gavrilov was first into La Source, while there was contact between the Audi RS 3 LMS of Tom Coronel and Felice Jelmini’s Hyundai Elantra N. Nicolas Baert attacked Franco Girolami, but Azcona passed Baert after starting from seventh on the grid. The Spaniard then passed Girolami for third, which quickly became second after race leader Gavrilov headed for the pits for slicks.
On the next lap, Azcona passed his compatriot Isidro Callejas for second and began his pursuit of the new race leader, Teddy Clairet. Behind the scraps for the podium positions, Sami Taoufik passed Baert for P5 and then began attacking Girolami, while Niels Langeveld and Homola both passed Mehdi Bennani for seventh and eighth respectively with Homola then passing Langeveld. While Azcona was closing in on the leader, there was contact between Taoufik and Girolami at La Source before the Hyundai passed the Honda going down the Kemmel Straight and Homola was able to pass both to move up to fourth. Girolami and Baert were lucky to escape unscathed after they went onto the grass, Azcona powered past Teddy Clairet under braking for the chicane to take the lead.
On Lap 7, Homola passed Callejas for third while further Bennani passed Baert for eighth. Baert, however, retook the position thanks to the slipstream coming down the Kemmel Straight and was also able to pass Girolami for P7. The Argentine retook seventh on the penultimate lap and Homola’s inspired gamble on taking four slicks paid off on the final lap when he was able to pass Teddy Clairet for second.
But the race – and the weekend – belonged to Azcona. He encored his 2020 result of claiming both race victories and so, together with qualifying in fourth place, scored 87 out of the possible 90 points on offer over the event. That means the Volcano Motorsport driver will take a 30-point lead in the Drivers’ standings when TCR Europe will resume at the Nürburgring on September 3/5.