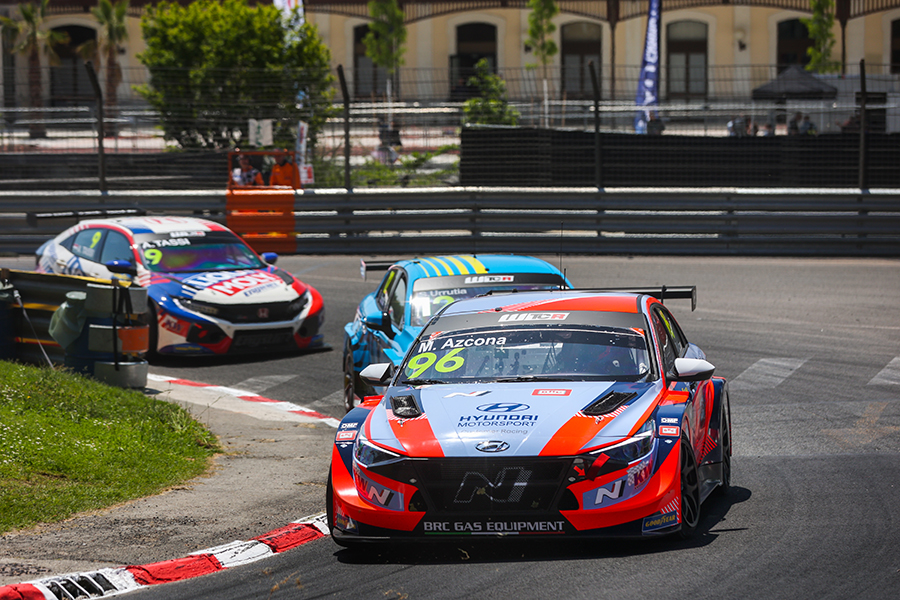 Mikel Azcona took victory in the second race of the WTCR opening weekend at Pau for the BRC Racing Team, moving into the lead at the start as the front-row men ahead of him – Norbert Michelisz and Attila Tassi – collided. Azcona then led the whole way through what was then largely a processional race, winning from Santiago Urrutia and Ma Qing Hua.

Michelisz started from pole in his Hyundai ahead of countryman Tassi’s Honda. The latter had a better start, so Michelisz moved over to try and cover him off but the two collided. Michelisz’s car suffered terminal damage in the incident, while Tassi was able to rejoin at the back of the pack following a brief safety car period.

The drama also caused a concertina effect, which caught out the two Comtoyou Racing Audi cars of Mehdi Bennani and Gilles Magnus.

Azcona led the way at restart ahead of three of Cyan Racing’s Lynk & Co cars, with Urrutia ahead of Yann Ehrlacher and Ma. Ehrlacher dropped down the order when he was forced to stop with a front-right puncture, promoting Ma to third.

Azcona won the race by four seconds over Urrutia, with Ma just half a second back.

Race 1 winner Néstor Girolami finished seventh and maintained the lead of the drivers’ championship on 49 points, seven clear of his Münnich Motorsport teammate Esteban Guerrieri and eight clear of Azcona.

The next round of WTCR takes place at the Nürburgring on May 26-28.