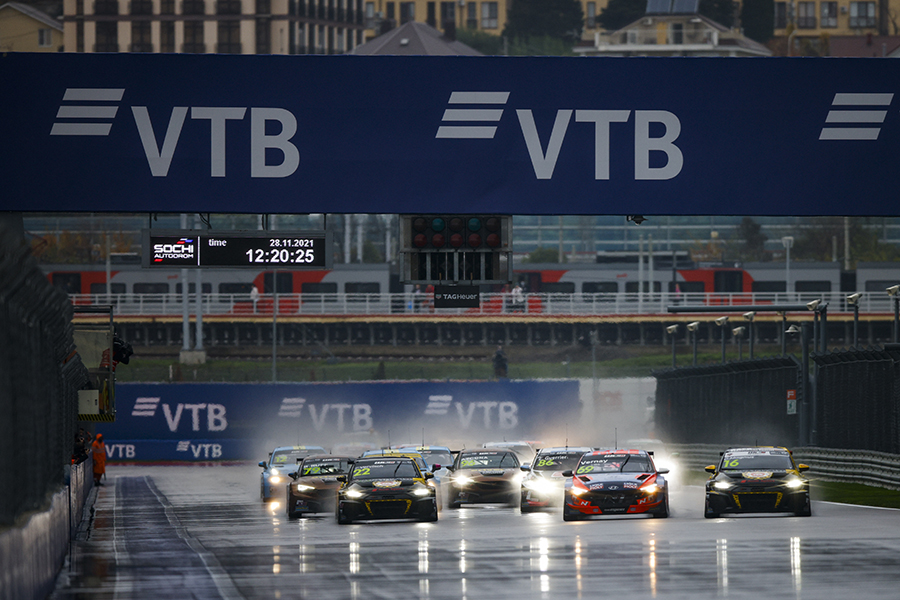 Yann Ehrlacher secured a second consecutive WTCR title by finishing sixth in a wet first race at Sochi in which the TCR Europe champion Mikel Azcona took his and CUPRA’s first victory of the season. Azcona moved into the lead during the final lap, passing Jean-Karl Vernays’ Hyundai Elantra that had been leading since lap 4.
At the start, Vernay had the best reflex from P3 on the grid and led from pole sitter Gilles Magnus; however, Magnus was able to repass Vernay before Turn 2; behind them Esteban Guerrieri tried to pass Frédéric Vervisch for P3 on the outside at Turn 4 but lost control and crashed into the wall. The safety car was deployed and when racing resumed in lap 4, Magnus was leading from Vernay, Vervisch, Rob Huff, Azcona, Nathanaël Berthon, Ehrlacher and Norbert Michelisz.
Soon, Vernay managed to pass Magnus for the lead; the young Belgian dropped to third behind his teammate Vervisch and found himself attacked by Huff for P3. Magnus and Huff swapped the positions several times and Azcona benefited from the situation to pass Huff for P4.
Further behind, Michelisz ran wide at Turn 1 and dropped from 8th to 12th; with Guerrieri out and Vervisch, second, Ehrlacher’s seventh position would grant him the title and the young Frenchman was now backed by his Lynk & Co teammates Yvan Muller and Santiago Urrutia who were running 8th and 9th.
Azcona overtook Magnus for P3, but they made contact in lap 7 and so Huff passed them both. In lap 9, Vernay was closely chased by Vervisch who was followed by Huff and Azcona. Huff tried to pass Vervisch, who did not open the door; they made contact and the front left suspension of Huff’s CUPRA collapsed. Azcona sealed the opportunity to pass Vervisch for second and quickly closed the gap to Vernay. After a brief skirmish, Azcona passed Vernay into Turn 5 and went to win with a 1.4-second margin over the Frenchman; Vervisch completed the podium ahead of the other Audi cars of his teammates Magnus and Berthon, with Ehrlacher sixth and Attila Tassi seventh. However, after the race Vervisch was dropped to sixth by a five-second penalty for a grid infringement.
The second race is scheduled for 14:15 local time (12:15 CET).