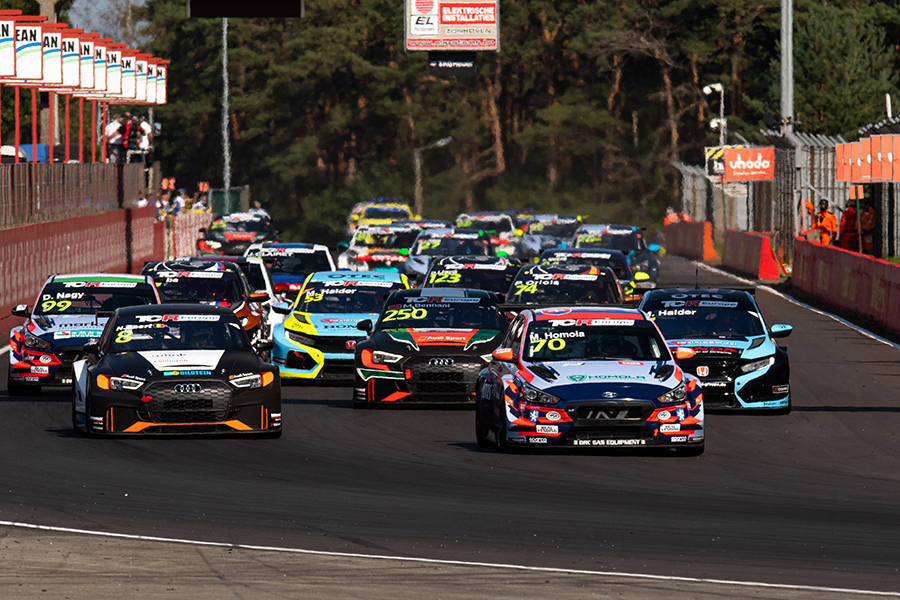 Nicolas Baert completed his perfect day by converting the pole position into his maiden TCR Europe victory in what is set to be a weekend to remember for Cometoyou Racing at Zolder.
The Belgian youngster did not make good use of his pole at the start but reacted immediately and recovered the first position. Then he managed to pull away every time the field was released after a safety car of full course yellow phase. Mike Halder claimed a precious second position for his title bid, while Mat’o Homola scored his first podium result of the season by finishing third ahead of his teammate Dániel Nagy. The fifth place was enough for Daniel Lloyd to retake the leadership in the standings, as Mehdi Bennani was stopped by an engine issue.
Homola made a better start than Baert and led into Turn 1, but the pole sitter retook the first position during the opening lap. Behind them there was commotion: Andreas Bäckman and Sami Taoufik dropped at the back of the field, while Pepe Oriola spun off at Turn 6 after being hit by his own teammate Daniel Lloyd.
In lap 2, Mike Halder took second from Homola, who was chased by Bennani and Nagy, while Lloyd passed Michelle Halder for P6.
In lap 5, both the Bäckman siblings crashed, Jessica at Turn 11 and Andreas at Turn 6; the safety car was deployed. When racing resumed in lap 8, Bennani slowed down and retired into the pits; Julien Briché and John Filippi collided at Turn 9 while fighting for P10 and then rejoined.
In lap 11, Florian Briché and Jean-Laurent Navarro made contact; the former limped to the pit, while the latter stopped on the track, causing a Full Course Yellow that regrouped the field until the green flag was waved at the beginning of lap 13. Soon afterwards, Martin Ryba overtook Michelle Halder for P6 and Julien Briché pulled up after hitting the barriers.
There were no other changes, Baert took the chequered flag nearly three seconds ahead of Halder, while Homola kept Nagy at bay to retain third position.
Race 2 is scheduled to start tomorrow at 15:20 CEST; live streaming at www.tcr-series.com.