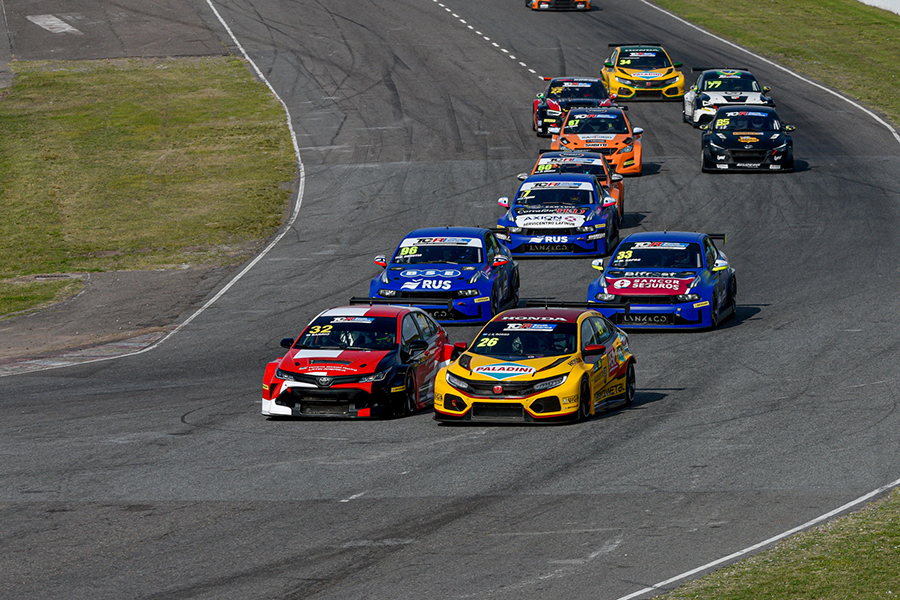 The new Toyota Corolla GRS claimed its maiden win on the second appearance, when Jorge Barrio took the chequered flag in TCR South America’s Race 1 at Buenos Aires, while the second race was dominated by Raphael Reis. Barrio is not eligible to score because the Toyota is running with a temporary homologation form and so Juan Àngel Rosso scored the maximum points in Race 1, but then finished only 10th in Race 2. With two third places, Fabricio Pezzini retained the lead in the standings with a margin of 67 points over Rosso that are actually 43, as Pezzini must drop 24 points and Rosso none. With 91 points at stake in the championship finale at San Juán on October 7/9, they are the only drivers realistically in contention, as the third-placed Reis has a gap of 87.

Race 1 – Barrio placed the Corolla on pole with a lap of 1:19.917, one tenth faster than Rosso. At the start Barrio kept Rosso at bay and led the field; behind them were the Lynk & Co cars of José Manuel Sapag, Santiago Urrutia and Pezzini. In lap 1, Sapag made a small mistake and Urrutia moved into P3. In lap 4, Reis was punted into a spin by Ignacio Montenegro while they were fighting for ninth; Reis rejoined at the back, while Montenegro passed Pedro Aizza, Franco Farina and Juan Manuella Casella climbing to sixth. Up front, Barrio built a small gap ahead of Rosso, while Urrutia lost contact. In lap 12, Pezzini overtook Sapag for P4; one lap later, Sapag lost fifth to Montenegro. In lap 15, Montenegro lost two laps in the pits with engine power issues.

Barrio won by three seconds over Rosso, with Urrutia a distant third ahead of Pezzini.

Race 2 – The front row of the partially reversed grid saw Reis on pole and Gabriel Lusquiños alongside. Reis got away well and led from Lusquiños, Aizza and Farina, while Pezzini hit Casella who spun off. Pezzini advanced to third as he passed Farina in lap 2 and Aizza in lap 5, while both his teammates Sapag and Urrutia retired with engine issues. Reis built a comfortable margin over Lusquiños, while Farina overtook Aizza for fourth. The latter dropped down after a thrilling battle with Barrio, Montenegro, Enrique Maglione and Rosso. In lap 11, Montenegro overtook Barrio for P5; one lap later, Farina and Montenegro were on the tail of Pezzini’s car, but they were not able to pass him. During the penultimate lap, Maglione destroyed his Peugeot in a high-speed crash, but escaped unscathed. Reis, Lusquiños and Pezzini filled the podium, while Rosso slowed with overheating problems to finish 10th.