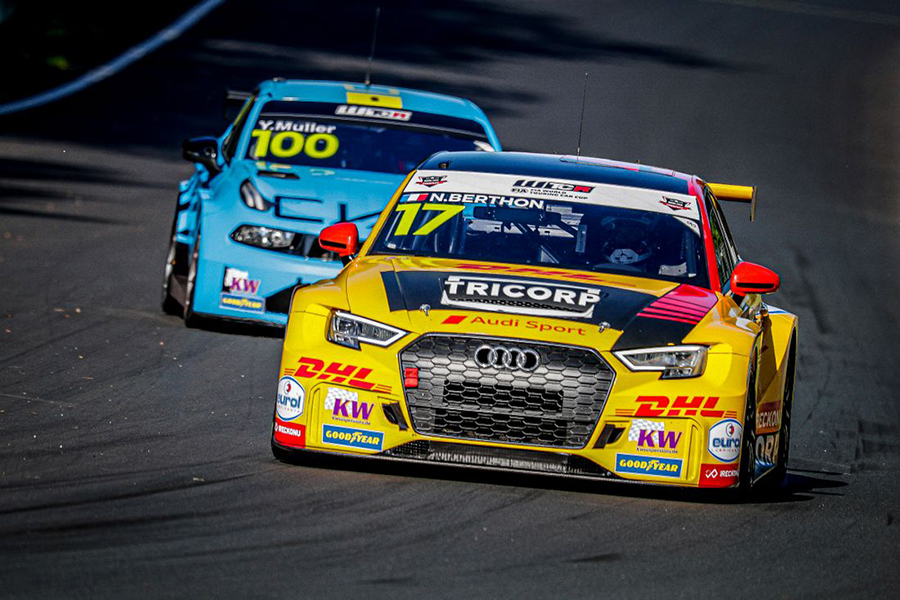 Nathanaël Berthon created a surprise in the first Qualifying of the 2020 WTCR season, as he claimed his maiden pole position. It was the icing on the cake for Comtoyou Racing and Audi that had won pole position in TCR Europe with Nicolas Baert a couple of hours earlier.
Berthon was the last one to hit the track in Q3 and stopped the clock at 1:35.486, beating Yann Ehrlacher’s provisional fastest lap of 31 thousandths of a second, while his own teammate Gilles Magnus qualified in third position a further ten thousandths adrift.
Santiago Urrutia and Yvan Muller completed the top five, proving that the Lynk & Co cars will be the fiercest competitors for Audi.
Ehrlacher had posted the fastest lap at the end of Q1 (1:35.827) demoting his teammate Thed Björk (1:35.952) to second. After setting a provisional fastest lap (1:36.050) Magnus dropped to third ahead of Muller (1:36.076) and Tom Coronel (1:36.176). Attila Tassi, Urrutia, Berthon, Esteban Guerrieri and Jean-Karl Vernay rounded off the top-ten while the last two places for Q2 went to Norbert Michelisz and Néstor Girolami.
Australian guest driver Dylan O’Keeffe was the first of those who didn’t make the cut, 13th, one tenth behind Girolami. Nicky Catsburg, Gabriele Tarquini and Luca Engstler too failed to advance to the second part of the session.
In Q2, Magnus set the pace, clocking a 1:35.480 on his second timed lap, which ousted Urrutia from the top. The Uruguayan improved further to 1:35.644 but remained in second position, while the others who qualified for Q3 were Ehrlacher, Muller and Berthon who kicked off his teammate Coronel.
Race 1 will start on Sunday at 10:30; the top-ten reversed grid will see Girolami’s Honda Civic on pole position, alongside Vernay’s Alfa Romeo. Luca Filippi in the second Alfa car will be dropped from 19th to last on the grid for not slowing down under yellow flag during this morning’s practice.