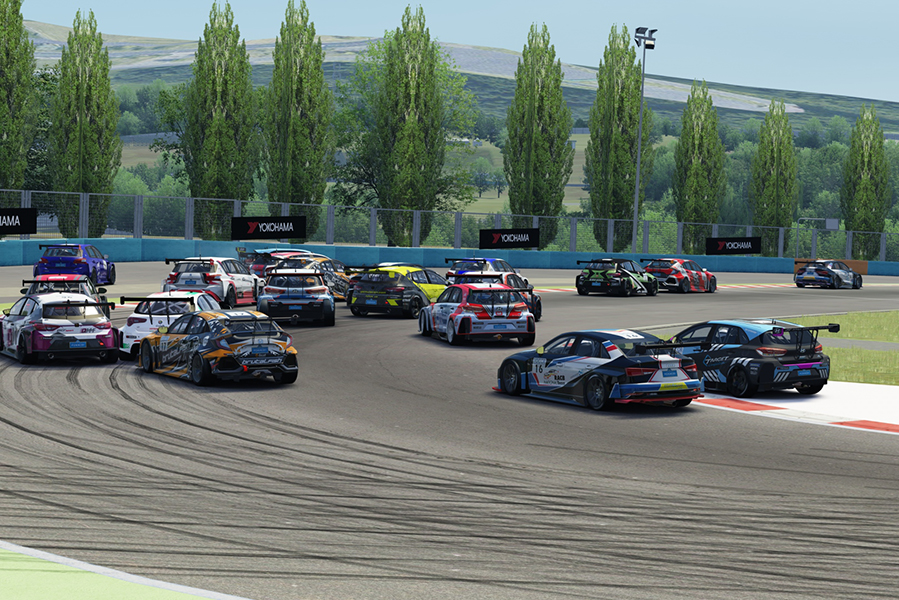 BRC Racing Team’s fellow drivers Dániel Nagy and Mat’o Homola shared the honours in the third event of the TCR Europe SIM Racing series at the virtual track of the Hungaroring. Nagy won Race 1, his fourth victory out of the six races held so far, but then getting caught up in an incident early in Race 2 that saw him finish in a lowly 19th place. Victory in the Race 2 went to Homola after a number of incidents and some thrilling battles among the top five places. After Nagy domination, the Race 2 result opens up the series slightly as it heads towards its halfway point.

Race 1 – It was another masterful performance from Nagy who took a lights-to flag victory. A strong start saw Nagy’s Hyundai head into Turn 1 in the lead and the young Hungarian driver was then never threatened. For the first half of the race, it looked as Magnus would finish a comfortable second, but his pedals stopped working on Lap 8 and the Belgian was forced to reset the game and finished way down the order. Homola, too, had a race to forget; because of damage following several contacts (firstly with Langeveld on Lap 2 and then with Andreas Bäckman on Lap 4) he finished in P15. Instead, it was Comte and Langeveld who finished on the virtual podium, after the pair fought over second place during the final few laps. The race saw several retirements, with Mikel Azcona failing to make the start after a power cut in the area around his home and Kevin Ceccon for an unspecified technical issue.

Race 2 – The Audi of Nicolas Baert started from pole on the reversed grid after finishing twelfth in Race 1, with Julien Briché’s Peugeot alongside him on the front row. At the start, Baert led into Turn 1, but Briché went wide and there were several collisions as the field headed through the right-hand downhill corner. Among the casualties were both of the two race winners so far in the series – Nagy dropped to P15 while Langeveld (who’d won Race 2 at the virtual Red Bull Ring) dropped to P12. Baert then led from Victor Davidovski’s Honda, with Bence Boldizs third and Jimmy Clairet fourth. Homola passed Briché for fifth on Lap 2, with Magnus passing Martin Ryba for P7 two laps later. A group of five cars then ran together at the head of the field, with Davidovski lucky to hang onto P2 after contact with Boldizs on Lap 5. Boldizs was then passed by Clairet and Homola on the following lap, but the biggest dramas were still to come. Davidovski attacked Baert for the lead on Lap 7, but the pair made contact and Davidovski came off worse, eventually finishing ninth. There was then contact between Clairet and Baert on Lap 10 which saw the pair drop places, allowing Homola to move into the lead. That’s how it remained until the end of the race, with Homola taking his first win of the series and Boldizs and Clairet completing the podium. Langeveld recovered from the opening lap incident to finish sixth behind Magnus and Briché, while Baert finished seventh and Andreas Bäckman, Davidovski and Comte completed the top ten.

Hungarian drivers occupy the top three places in the standings after their home event, with Nagy’s lead now 32 points over Boldizs and Tenke a further 26 points adrift. The next round will be at the virtual Paul Ricard circuit at Le Castellet on June 10th.