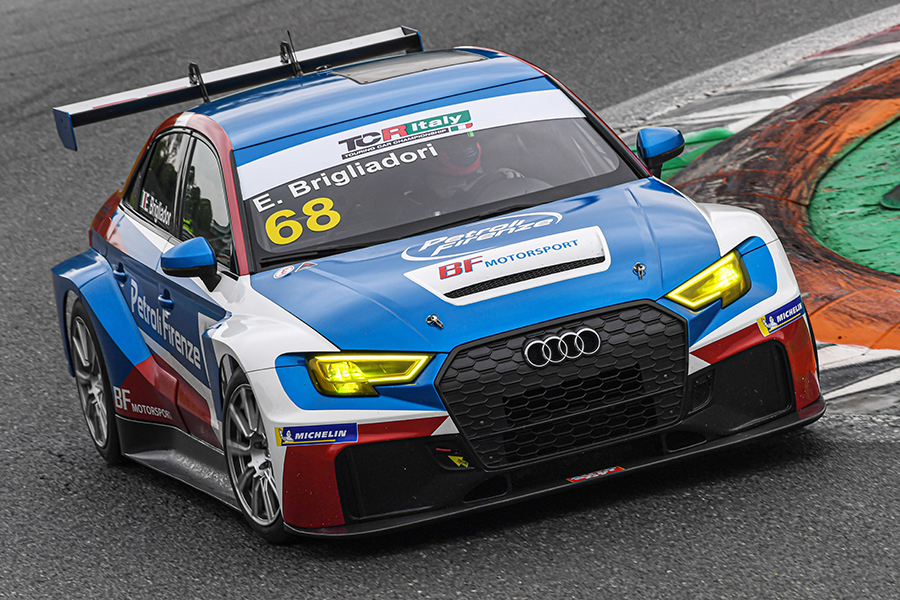 BF Motorsport driver Eric Brigliadori set the first pole position of the 2021 TCR Italy season at Monza with his Audi RS 3 LMS.
The record field of 26 cars began the 25-minute session on a wet track and Nicola Baldan set the pace in the early stages at the wheel of his Target Competition-run Hyundai i30 N. Baldan posted provisional fastest laps during the first half of the session at 2:06.827 and 2:04.251. However, as the track dried up lap times were significantly improved.
With two minutes left another Hyundai competitor, Kevin Ceccon of Aggressive Team Italia took the lead, but it was not the end of it as Eric Brigliadori clocked an even faster lap of 2:01.887 and claimed the pole in the final minute.
The second position went to Matteo Poloni’s Race Lab Audi RS 3 LMS that was just 0.066 second short of the pole.
After having topped the timesheet for a while, reigning champion Salvatore Tavano qualified his CUPRA Leon Competición in third place ahead of the Hyundai cars driven by Macedonian hero Igor Stefanovski and the 2020 ADAC TCR Germany champion Antti Buri, while Jonathan Giacon (Tecnodom Sport, Honda Civic Type R) and Ceccon ranked sixth and seventh respectively.
Estonian youngster Mattias Vahtel (ALM Racing, Honda Civic), Russian racer Evgenii Leonov (Volcano Motorsport, CUPRA Leon Competición) and Baldan rounded off the top-ten, while championship newcomer Denis Babuin qualified 17th and fastest of the DSG class in the Bolza Corse CUPRA.
Live streaming of both races at www.tcr-series.com; Race 1, Saturday at 13:40 and Race 2, Sunday at 10:10 local times (CEST).