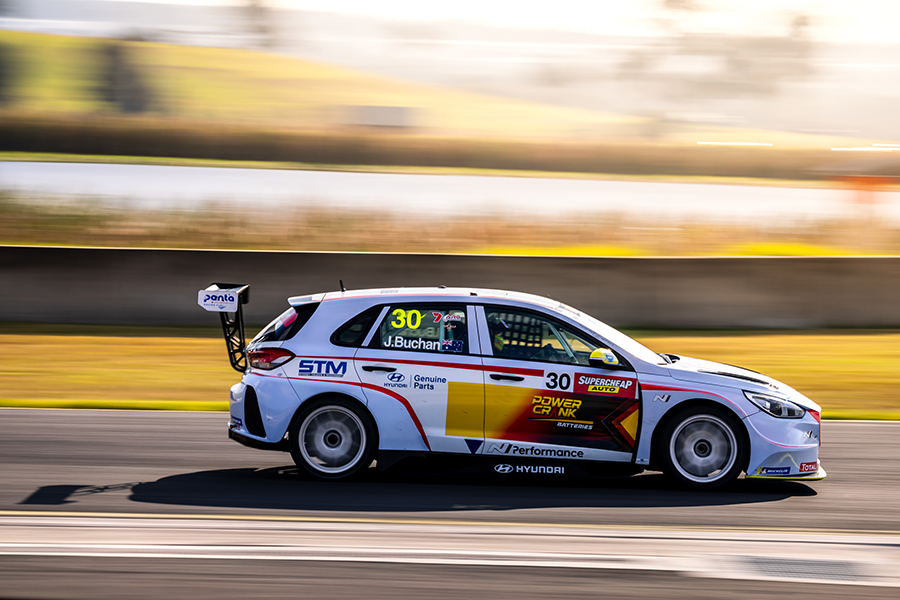 Josh Buchan claimed his maiden win in TCR Australia and the first of the season for Hyundai in Race 1 at Sydney Motorsport Park. James Moffat finished second, saving the day for Garry Rogers Motorsport after his teammate Dylan O’Keeffe who had set the pole position was forced to start last by a penalty. Championship leader Chaz Mostert completed the podium and increased his advantage in the standings.
O’Keeffe’s pole position vanished when the team had to work on the grid to solve a turbo issue on the Renault Mégane RS, and so the driver was given a drive-through that he served at the end of the warm-up lap.
Buchan and John Martin sprinted at the start, battling for the lead. During the opening lap, they swapped positions a couple of time and Martin led from Buchan, Moffat and Mostert. In lap 3, Buchan retook the lead at Turn 1 and seconds later Moffat too passed Martin for P2.
From that moment onwards, the race became processional; Jordan Cox had climbed to eighth after starting from P16 and O’Keeffe tried to recover after starting from the pit lane.
Buchan was able to build a small cushion ahead of Moffat; Martin defended the third place from Mostert, while Tony D’Alberto followed in P5 chased by Nathan Morcom, Michael Caruso and Cox. In lap 8, Ben Bargwanna spun off, rejoined and then pitted with brake issues losing one lap. In lap 12, Lee Holdsworth passed Aaron Cameron for P9.
During the penultimate lap, the pace of Martin’s Honda faded, and he began to drop from P3. Buchan won with a 3.3-second margin ahead of Moffat; Mostert advanced to third, while D’Alberto kept Morcom at bay for P4. O’Keeffe finished 10th and Martin dropped down to 12th.
In the standings, Mostart has stretched his leadership to 75 points ahead of Cameron; Luke King and Martin are third and fourth with gaps of 100 and 106 points respectively.
Races 2 is scheduled to start tomorrow at 10:10 local time (02:10 CEST), with Buchan and Moffat sharing the front row; live streaming at www.tcr-series.com.