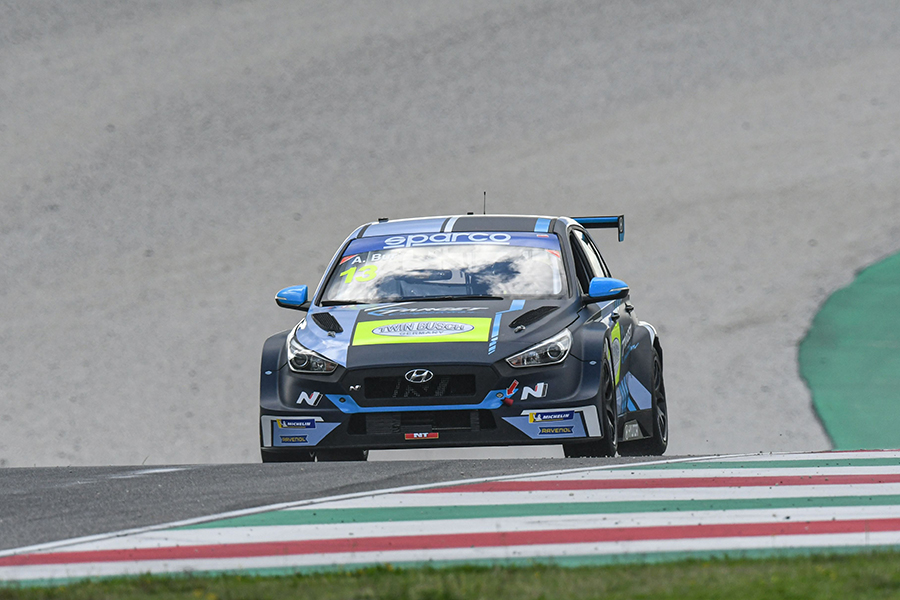 The 2020 ADAC TCR Germany champion Antti Buri took his second victory in TCR Italy at the end of the first race at Mugello that finished behind the safety car. The Finn started from pole position and led for the whole race, winning ahead of Sandro Soubek who scored his first podium and the defending champion Salvatore Tavano who was followed by the other title contenders Kevin Ceccon and Nicola Baldan.
From the pole, Buri led from Ceccon, Eric Brigliadori and Tavano who took a great getaway from P9 on the grid and benefited from the bad start of Ruben Volt on P4.
During the opening lap, Brigliadori spun and dropped to seventh; further back Marco Iannotta too spun and there was commotion that saw Riccardo Romagnoli, Denis Babuin and Piero Necchi in the gravel and the safety car deployed.
At the restart, Tavano passed Ceccon for second, and Michele Imberti overtook Baldan for P4. A thrilling battle ensued, with Baldan, Soubek, Brigliadori and Volt swapping positions several times, but in lap 5 Volt retired with a flat front tyre.
Up front, Buri pulled away ahead of Tavano who defended the second place from Ceccon, while Soubek passed Baldan and then Imberti moving up to fourth.
At the end of lap 8, Soubek advanced one more place overtaking Ceccon for third, Baldan overtook Imberti for fifth and Iannotta moved up to eighth ahead of Matteo Poloni.
Soubek’s climbing continued in lap 10, as the Austrian passed Tavano for second.
The final part of the race saw the trio of Tavano, Ceccon and Baldan fighting for P3, but the race was neutralized by the safety car when Iannotta’s Honda spun off after making contact with Poloni’s Audi and remained stranded in the gravel.
Racing did not resume, and the field took the chequered flag behind the safety car, with Buri the winner from Soubek, Tavano, Ceccon, Baldan, Imberti and Brigliadori.
Because drivers have to drop two scores, Buri is now the new leader with a margin of nine points over Tavano, while Ceccon is third, 15 points behind the Finn. The only other driver in contention is Baldan who has already dropped 21 points, slipping down from first to fourth with a gap of 20 points when 40 remain on offer in this afternoon’s final race that will start at 16:40 (CEST) with live streaming at www.tcr-series.com.
The next scores to be dropped are 13 for Buri, 11 for Tavano and 21 for Baldan, while Ceccon is the only one that doesn’t need to drop.
As the top eight in Qualifying are reversed on the grid for the second race, Poloni and Imberti will share the front row, while Buri will start eighth, Ceccon seventh, Baldan fourth and Tavano ninth.