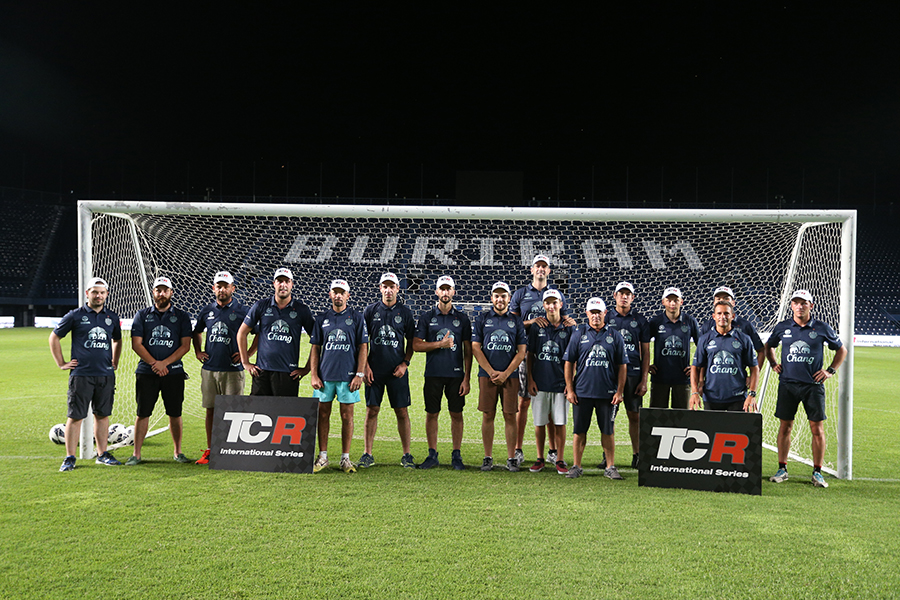 Motorsports and football are closely linked at Buriram, as the Chang International Circuit is next door to the I-Mobile Stadium, the home of Buriram United, one of the top teams in Thailand’s Premier League. Friday evening, an unusual match took place between TCR drivers and the Buriram United Academy, the junior team of local heroes.
The two sides played an intense match of two 15-minute half-times, which started with some difficulty for the TCR drivers, down by 3-0 after only six minutes… Progressively, though, the car aces reduced the gap, as they became more involved into the action and improved team effort. While Mikhail Grachev and Davit Kajaia, among others, showed excellent game vision, Jean-Karl Vernay and Dušan Borković impressed with technical skills.
The TCR squad reduced the disadvantage to 4-3, with goals of Borković and Marc Masip (Pepe Oriola’s personal trainer who scored twice), before Vernay tied the score in the dying seconds of the match.
The draw led to a penalty shoot-out that Buriram United young guns won 8-6. A truly honourable defeat for the four-wheel guys, which was followed with enthusiasm by the TCR and Buriram United communities, led by TCR promoter Marcello Lotti and Buriram United President Newin Chidchob. One of the top stars of Buriram United first team, Andrés Túñez, a former player of Venezuela national team, also attended and lent his savoir-faire to TCR drivers for a few minutes.