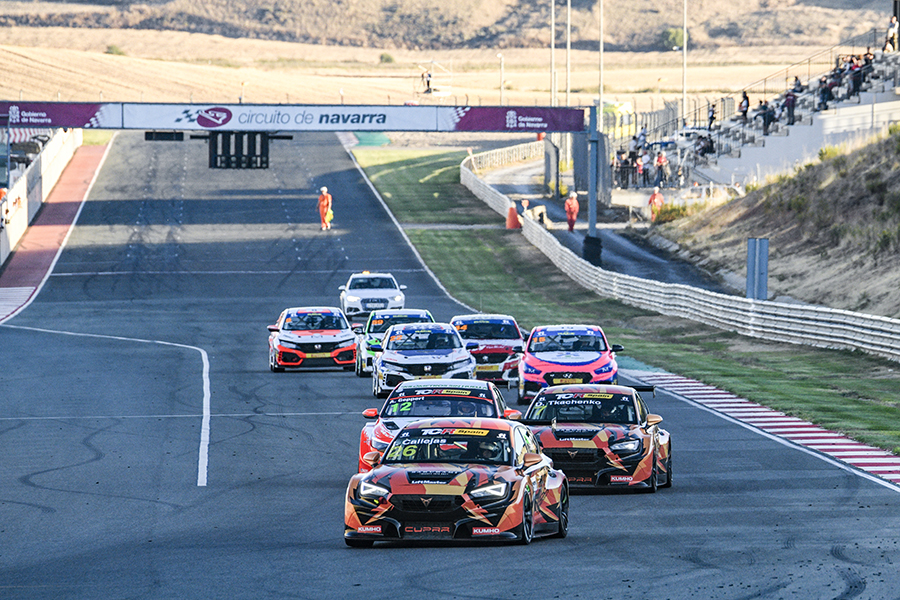 Cajellas wins twice in Navarra and stretches his points lead

The penultimate event of TCR Spain at Circuito de Navarra saw Isidro Callejas winning the first two races in his Volcano Motorsport CUPRA Leon Competición. The teenager from Córdoba has stretched his leadership in the standings to 74 points over Alejandro Geppert.

Callejas took a lights-to-flag win in the first race; he started from the pole and built a cushion of a few seconds over Geppert that helped him to retain the lead despite a mistake he made with four minutes left on the clock. Geppert finished 5.5 seconds behind.

Daniel Tkachenko led the second race at the start, but during the first lap the young Ukrainian was passed by Callejas; soon afterwards Tkachenko spun and collected Geppert who limped back to the pits and retired. Callejas cruised to another win, with Tkachenko finishing a distant second.

Geppert made up from the disappointing by claiming a victory in the last race of the day. His Teo Martín Motorsport Hyundai Elantra stalled at the start, while Callejas took the lead once again. However, both Volcano Motorsport drivers were given drive-through penalties for jump start, which handed the lead to Geppert who scored his fourth win of the season with a margin of seven tenths over Callejas, while Tkachenko was disqualified for not serving the drive through.

The series will finish on November 12/3 at Barcelona.